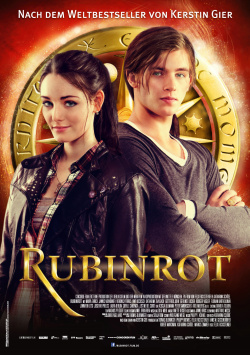 At first glance, Gwendolyn Shepherd (Maria Ehrich) seems to live the life of a normal sixteen-year-old teenager in London. There's always a rough catfight with her cousin Charlotte (Laura Berlin), and it's all because Charlotte supposedly carries the family's fabled time-travel gene and therefore feels like something much better. Too bad it's not Charlotte, but Gwendolyn who has inherited the gene, as the girl is surprised to discover one day when she is catapulted more than a hundred years into the past without warning. From then on, such time jumps occur again and again, but they are usually short-lived. Now it is Gwendolyn who has to be trained for a very special mission in Charlott's place. With the help of the arrogant Gideon de Villiers (Jannis Niewöhner), she is not only to learn how to control the time jumps. She is also to work with him to unravel a great mystery in the past that could also bring Gwendolyn the long-awaited answers to the mysteries surrounding her family history. However, it is not only Charlotte's envy, mysterious adversaries and the fact that she can apparently see ghosts that makes this task visibly more difficult for Gwendolyn. Because she also feels that she is beginning to develop feelings for Gideon. And now she doesn't need that at all.

Ruby Red is based on the first volume of Kerstin Gier's popular trilogy of novels Love Goes Through All Ages, consisting of Ruby Red, Sapphire Blue, and Emerald Green. The books, which have been translated into 28 languages and have sold well over 1 million copies, offer the perfect basis for an exciting cinematic adventure with their mixture of fantasy, adventure, romance and completely normal teenage problems, in which young girls in particular can have a lot of fun. Felix Fuchssteiner and his team did everything they could to show the international competition that Germany can also have its Twilight or Panem.

With atmospheric locations found in London and in various parts of Germany, elaborate costumes, neat special effects and a harmonious musical background, very good conditions were created for the success of the novel adaptation. With Maria Ehrich, known from the mini-series Das Adlon or the cinema musical Rock it!, a sympathetic and charismatic actress was found for the heroine, with whom girls can quickly identify. Ehrich comes across as natural and uninhibited, which suits her somewhat rebellious role very well.

Although the first encounter between Gwendolyn and Gideon is reminiscent of Bella's first look at Edward in an almost brazen way, the parallels to the Twilight saga are otherwise pleasantly contained. They are there, but still Ruby Red just doesn't feel like a copy that wants to ride that wave, but like something all its own.

That's all well and good so far. But there are also some aspects that are not so successful and sometimes even seem a bit annoying because of their unnecessity. The biggest problem is one that is actually especially noticeable in German children's films in a negative way. It concerns the drawing of the adult characters, who are often portrayed as too over-the-top stupid or funny. It may be that children can laugh about it. But since Ruby Red is actually aimed at teenagers, such a stylistic device is rather inappropriate and disturbing. For example, the grandma played by Katharina Thalbach is just a somewhat reduced version of the unspeakable French teacher Thalbach plays in the Hanni & Nanni films. With an exaggeratedly bad wig and not very subtle facial expressions, the granny quickly degenerates into a figure of fun, which doesn't really do justice to the character, which is important in itself. And also the lady who is responsible for making sure that Gwendolyn always wears the right clothes on her journeys into the past is simply not funny with her overdone manner and her French cliché accent, but just annoying. At moments like this, you get the feeling that the makers didn't quite realize that they weren't directing a children's movie here, but a romantic adventure for teenagers. And there are so flatly drawn characters, which should only serve for a quick laugh, simply out of place.

That the film also has its weaknesses in the dialogues and the somewhat too extreme use of familiar clichés, does not weigh negatively against it. Because in the end Ruby Red offers exactly what girls want to see in the moments when you as a slightly older viewer just want to roll your eyes in annoyance. If Fuchssteiner had managed to offer this throughout and to dispense with some unnecessary slips, his bestseller adaptation could easily have been in a league with at least Twilight. As it is, however, the whole thing has become a well-intentioned adventure worth watching even for the target audience, which tells an exciting story, but wants to seem a little too cramped international. And the film version of the first volume of the trilogy at least only really reached that level in a few moments. Therefore: for girls between 14 and 18, who loved the book, definitely worth seeing!