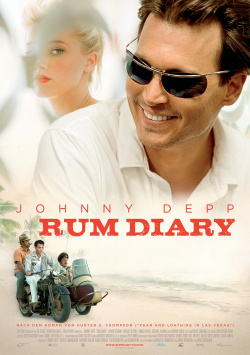 Johnny Depp has a very special relationship with Hunter S. Thompson. It wasn't just that he had already appeared on camera in the film adaptation of the cult novel Fear and Loathing in Las Vegas, directed by Terry Gilliam. It was also Depp who, while visiting Thompson at his cabin in Woody Creek, came across a manuscript that the legendary gonzo journalist had written back in 1959 but never published. Even before The Rum Diary was published four decades after the book was actually written, Depp dreamed of a cinematic adaptation. Now, seven years after Hunter S. Thompson's suicide, Depp's wish has finally come true, directed by Bruce Robinson.

Rum Diary takes viewers to Puerto Rico in 1960: journalist Paul Kemp (Johnny Depp) wants to find the success here that has eluded him in New York. When he takes up his job at the San Juan Star, he is primarily allowed to report on the bowling passion of American tourists. But then he gets to know the businessman Sanderson (Aaron Eckhart) and thus the particularly beautiful sides of Puerto Rico. This includes Sanderson's seductive mistress Chenault (Amber Heard), whom Paul immediately falls for. But when his crush turns into a passionate affair, and Paul incidentally uncovers some particularly unsavory dealings by Sanderson and his powerful associates, the air quickly becomes extremely thin for the journalist...

Rum Diary begins very promisingly. Paul's first encounter with his new supervisor (wonderful: Richard Jenkins) and the sometimes very weird colleagues in the newsroom are full of humorous and satirical potential, which Bruce Robinson knows how to use well here and there. But after a very biting beginning Robinson loosens up the whole thing more and more, whereby the action drifts more and more into a kind of triviality, which is only occasionally broken up by very clever ideas. The attempt to give the whole thing the twisted cult character that is inherent in Fear and Loathing in Las Vegas through a sequence of a wacky drug binge that doesn't appear in the book seems to be too much of an effort to be really convincing.

There are, of course, many things that still make this film worth seeing. Johnny Depp acts somewhat routinely, but still in a very entertaining, winning way that truly enhances the film. Also, the beautiful visuals shot in original locations, a wonderfully loopy Giovanni Ribisi, and a beguiling Amber Heard are also among the aspects that pull this ambitious adaptation of the novel above mediocrity. The counterbalance is provided by the somewhat undercooked love story and the somewhat too boldly realized plotline involving the business dealings of Sanderson and his influential friends. While the look at Puerto Rico's sociopolitical situation is served up with a certain satirical malice in the first few minutes of the film, this part of the film just seems too well-behaved to do justice to Hunter S. Thompson's style.

The scenes showing Paul together with his colleague Sala (Michael Rispoli) (and especially his very special way of watching television) do make up for some of the film's less successful moments. However, even the most amusing and enjoyably poisonous moments can't hide the fact that Rum Diary leaves a lot of potential untapped and in the end is just too well-behaved and slick to really make an impression. Beautiful to look at, the film certainly is, and for the first half at least, the story is also extremely entertaining. But the big hit, which could have been expected due to the template and the actors, this Hunter S. Thompson adaptation is unfortunately not become. Therefore: only with cutbacks still worth seeing!