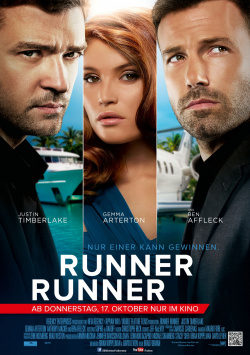 Getting a Runner Runner in the poker variant Texas Hold `em is one of those rare strokes of luck that can completely upend a game. This hand can turn sure winners into losers in one fell swoop, and such players who feared losing everything into quite big winners. For Princeton grad student Richie (Justin Timberlake), meeting online gambling tycoon Ivan Block (Ben Affleck) is such a runner runner. After Richie loses nearly all of his savings trying to win his college tuition playing online poker, and upon closer examination of his anonymous opponents' gambling habits discovers that cheating has been going on at the game, he decides to take an unusually drastic step: he flies to Costa Rica and seeks out Block, the founder of the online platform, to alert him to the abuses at the site. Impressed by Richie's technical know-how and determination, Block offers the young student a job - a job that will bring him fast money and a life of luxury on the Costa Rican coast. The tide seems to have finally turned for the son of a notorious gambler, especially since he soon has an attractive woman by his side and in his bed, Block's co-worker Rebecca (Gemma Arterton). Everything seems perfect - until the FBI calls on Richie and he must realize that his great idol Ivan Block is obviously playing with the wrong cards.

With Runner Runner, director Brad Furman has not delivered a full house. Rather, the thriller is a pretty decent hand, with which he does not completely lose, but just can not really clear. The fact that the film is quite entertaining and worth seeing is not only due to the nice visuals, but especially to the main actors. While Justin Timberlake doesn't necessarily deliver his best performance, but once again reveals his acting talent, Ben Affleck pleases as a slick and ice-cold villain. The rather limited facial expressions that Affleck is often accused of and labeled as lacking in talent are a perfect fit here for the role of the shady online poker tycoon. When Block initially ensnares Richie with wealth and power, dazzling what should be his keen senses, only to ice-coldly dump him, it commands a high entertainment value thanks to the cast, from which the film as a whole benefits greatly.

Denn Furman, who most recently impressed with the judicial thriller The Client, relies too much on the stylish visuals and the power of the interesting initial idea, and in the process fails to flesh out the story in a rousing way or add any depth to his characters. Time and again, potential for more is apparent, but Furman leaves it largely untapped. A case in point is the relationship between Richie and Rebecca. Despite hiring Gemma Arterton, an actress who is actually capable of much more than just being good-looking, the opportunities to make Rebecca a shadier, more exciting character are not taken, despite all the opportunities available to do so. Instead, the former Bond girl degenerates into pretty accessory. While she does have some importance to the progression of the story, it is presented too clearly and with too little surprise to be truly convincing.

Runner Runner also falls far short in other aspects. That's not to say Furman has delivered a bad film. It's just that it becomes apparent time and time again that he could have achieved a much better result if a little more attention had been paid to fleshing out the story and characters. As it is, the whole thing is just decent entertainment that never really gets boring, here and there even pleasantly thrilling, but somehow also turns out a bit arbitrary. Nevertheless, in the end it is just enough for a: Worth seeing!