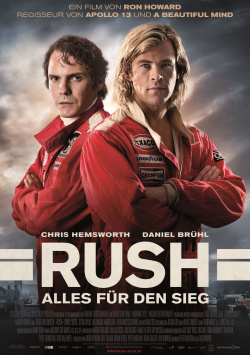 Rush - Anything for the Win

The 1976 Formula 1 season was one thing in particular: a fierce duel between two completely different racing drivers. On one side, disciplined strategist Niki Lauda (Daniel Brühl); on the other, hotheaded playboy James Hunt (Chris Hemsworth). Since their first meeting, the two have been adversaries who have respect enough for each other's performance to know how hard they must fight to be on the winner's podium at the end of the season. At the beginning, Niki Lauda has an almost unassailable lead. But with the dramatic events during the race at the Nürburgring on 01 August 1976 everything changes.

Rush seems at first glance to be primarily concerned with the Formula 1 circus and with the tragic accident of Niki Lauda. Had director Ron Howard (Apollo 13, Illuminati) actually focused solely on these aspects of the story, the film could quite easily have been a flop, rightly accused of sensationalism. However, although there are some superbly staged and extremely involving racing scenes, and although Lauda's accident is a key event, the dramaturgical treatment of the 1976 racing season is, at its core, about the two very different characters and their long-standing rivalry.

The polished screenplay by Peter Morgan, who had already written the book for Howard on Frost/Nixon, the work of Oscar-winning cinematographer Anthony Dod Mantle (Slumdog Millionaire), the soundtrack by Hans Zimmer and the filming on original locations such as the Nürburgring ensure that the viewer is transported not only into the story but also into the glamorous 1970s. But it is not only the team behind the camera that has delivered first-class performances in this portrait of the zeitgeist. Great praise is also due to the actors, first and foremost Daniel Brühl, who as Niki Lauda easily outplays his famous co-stars.

No question, Chris Hemsworth is also perfectly cast as cool playboy James Hunt and there is little to complain about in the supporting cast such as Olivia Wilde, Christian McKay or Alexandra Maria Lara. It's simply a great pleasure to watch this well-chosen ensemble. But none of them merges with their roles as convincingly as Brühl manages to do here. Facial expressions, voice, body language - Daniel Brühl gets it all absolutely right here. His acting, along with the script, is the main reason why Rush is convincing not just as a racing spectacle, but as a gripping drama about the power of the human will.

Ron Howard has delivered a very European-sounding film here that rarely uses the pathos so popular in Hollywood, relying instead on its dense dramaturgy and convincing character drawing. It's a rousing drama peppered with some light-hearted humour and some great racing scenes, making for perfect cinema entertainment overall. Whether you're a Formula 1 fan or not, Rush is clearly worth watching

Cinema trailer for the movie "Rush - Anything for the Win (USA/Großbritannien/Deutschland 2013)"
Loading the player ...