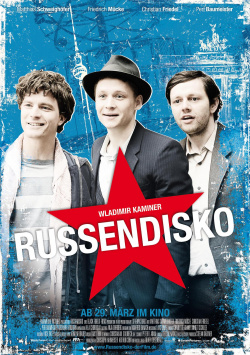 Matthias Schweighöfer is currently without a doubt one of the most successful and busiest actors in German cinema. In quick succession, the success guarantor, who is now also increasingly trying his hand as a director, has brought two cinema hits to the start with What a Man and Rubbeldiekatz, which should now be followed by the next hit with the film adaptation of Vladimir Kaminer's cult novel Russendisko.

The film tells the story of three young Russians, Wladimir (Schweighöfer), Mischa (Friedrich Mücke) and Andrej (Christian Friedel), who leave their native Moscow in the spring of 1990 as Berlin supposedly welcomes Jews from the Soviet Union with open arms as reparations for the GDR never contributing to payments for Israel. But when they arrive in Berlin, they find a city in total upheaval shortly after the fall of the Berlin Wall. But even though they have not found the paradise they had hoped for, the three friends are not so easily discouraged. Each of them has a dream that should come true here. Misha is determined to start a career as a musician, Andrei hopes to finally get rid of the melancholy he has been struggling with since he was bewitched by an old woman as a child. And finally, Vladimir wishes to find a meaning to his life. This seems to come his way after only a short time in the form of the beautiful dancer Olga (Peri Baumeister). It is a promising start in the city that is to become their new home. But over the course of the summer, not only the young men's optimism but also their friendship is repeatedly put to the test...

How close the film adaptation of Russendisko comes to its novel premise, I'm afraid I can't judge, as I haven't read the book so far. So I can only judge the film on its own merits. And taken on its own, the comedy is a quite likeable and sometimes very amusing work, which lives especially from the good chemistry between the three main actors. How well Matthias Schweighöfer and Friedrich Mücke harmonize together, the two have already shown in Friendship! And here, too, you can take their years of friendship in every minute, with Christian Friedel (Das weisse Band) fitting in without a hitch and perfectly complementing the charismatic trio. And also Peri Baumeister and Susanne Bormann contribute to the very special charm of the film, through which one gladly overlooks the one or other rather bumpy staged scene.

Even though Russendisko is actually an ensemble film, Matthias Schweighöfer's character Wladimir is nevertheless in a way the focus of the action, which is not surprising, since this character is based on Wladimir Kaminer, the author of the book and inventor of the titular cult event. And so it is actually necessary to like Matthias Schweighöfer in order to succumb to the charm of Russendisko. Especially in his acting beginnings Schweighöfer has always shown a certain ability to change. But lately he's always done well with a certain kind of character, and so his Wladimir is only slightly different from Alex from Rubbeldiekatz or Moritz from Keinohrhasen/Zweiohrküken. If you liked the actor in those roles, you won't have a problem with Russendisko either - quite the opposite. But for viewers who find Schweighöfer's manner difficult to get along with, he could become a real disturbing factor, from which then the whole film has to suffer.

But apart from the actors, the portrayal of Berlin in the summer of 1990 can also please. With much attention to detail, the makers have captured the upheaval of the capital very authentic. What the film has to struggle with here and there, however, is the sometimes somewhat bumpy staging, which does not present the events in a clear flow, but repeatedly meanders around small side scenes. So in the end you are left with the feeling that you have seen a very nice and extremely entertaining movie, but at the same time it didn't live up to its full potential. Therefore, for all fans of Matthias Schweighöfer the film is a must, for lovers of the book probably also. However, those who are just looking forward to a lively German comedy might well be bothered by the one or other little hanger. Nevertheless, there is an absolutely satisfied: Worth seeing!