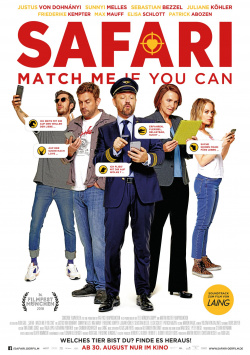 Safari: Match me if you can

Being single has its advantages, having a loving person by your side is much nicer in the end. But especially in the big city it proves to be extremely difficult to find the right lid to the pot, despite dating portals, Tinder and Co. Fortunately, there is the new Safari app, with which Fanny (Friederike Kempter) finally wants to find the man for life, single parent Life (Sebastian Bezzel) wants to take a break from being a father, young David (Max Mauff) wants to find a woman with whom he doesn't come too soon or 48-year-old Mona (Juliane Köhler) finally wants to find a steady partner at her side again. But whether it's for quick sex or for the love of a lifetime - loneliness can be defeated as easily as it seems at first glance, even with the app. On the contrary - it brings a lot more emotional chaos into the lives of its users.

The idea actually sounds very good: a zippy ensemble comedy about the love lives of city dwellers in the age of dating apps. It could have been extremely funny, biting and true to life. But alas, Safari: Match Me If You Can is none of those things. The humor is shockingly unimaginative and stale. This is especially evident with the wife of a notorious cheater, played so terribly by Sunny Melles - or does anyone really find a horrible French cliché accent funny anymore?

There are a few moments - the beginning of the film being one of them - where director Rudi Gaul almost perfectly exploits the potential this subject matter offers. But whenever the movie just seems to get the curve, the annoying soundtrack and gags served with a sledgehammer make sure that the viewer has to bury the hope for an enjoyable movie night right away. Even the always reliable Sebastian Bezzel can't do much about that.

A couple of good, well-intentioned actors, some really good lines and original ideas are not enough if the rest is as weak as it is here. Even the nice idea to bring all the storylines together at the end doesn't work, because it wasn't done very imaginatively, but only chaotically. If Safari: Match me if you can were actually an app, I guarantee it would be deleted pretty quickly. So, with the best will in the world, the bottom line is: Very conditionally worth seeing!

Cinema trailer for the movie "Safari: Match me if you can (Deutschland 2018)"
Loading the player ...