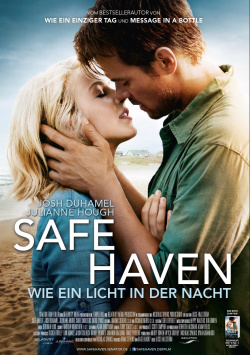 Once again the handkerchiefs may be pulled out. For the second time after The Shining of the Silence, director Lasse Hallström has dared to adapt a novel by bestselling author Nicholas Sparks. In Safe Haven - Like a Light in the Night, he tells the story of young Katie Feldman (Julianne Hough), who flees her marital hell for the tranquil coastal town of Southport, North Carolina. Here she wants to start a whole new, safe life. At first, she seems to succeed. She finds a job as a waitress and moves into a secluded wooden house in the middle of the woods. Otherwise, she tries not to attract attention, fearing that her past will catch up with her. But when single parent Alex (Josh Duhamel), who runs the local grocery store, begins to take an interest in Katie, Katie very slowly begins to let down her guard and trust and feel for a man again. She really seems to have found a safe haven in Southport, a veritable idyll that gives her a better life. But just when she is ready to be done with her past forever, it comes back to haunt her with a vengeance.

Safe Haven - Like a Light in the Night mixes the usual romance for Nicholas Sparks with light thriller elements, strongly reminiscent of the Julia Roberts film The Enemy in My Bed. This plot line is indeed set up in such a way that it is supposed to bring a surprising twist or two. But unfortunately, the staging is so lacking in subtlety and too ordinary to offer any real surprise effects to such viewers who haven't read the book. Even a big revelation at the end, which is not really predictable, is so obviously prepared that there will certainly be quite a few people who will have uncovered this mystery by the middle of the movie at the latest.

Nevertheless, even though no really new story is told here and countless clichés are used again and again, the target audience is still quite well entertained overall. This is primarily due to the fact that Southport and its inhabitants are drawn in such an engaging, charming and enchanting way that after the end of the film you would like to drop everything and go on holiday there. This place exudes a warmth that is hard to resist. Of course, this is pure manipulative postcard romance - but it just works really well! Josh Duhamel's sympathetic performance blends in perfectly with this place. You just feel at home here, which ultimately leads you to care about the characters and their story as well.

Julianne Hough, who most recently cut a fine figure in the remake of Footloose and the musical adaptation Rock of Ages, remains a bit pale overall. Therefore, the spark between her and Duhamel doesn't really want to jump over, which makes the romantic part of the film suffer a bit. But here again the idyllic landscape, the soundtrack and the coherent camera work help to make the audience pine.

Safe Haven - Like a Light in the Night is one of the weaker Sparks adaptations and definitely one of the weaker films by Lasse Hallström. But even if the big emotions are missing, this romantic-thriller-drama offers nice and entertaining entertainment for friends of common US romances with a slight kitsch factor. And that's why, despite all the obvious weak points, the bottom line is still a satisfied: Worth seeing!