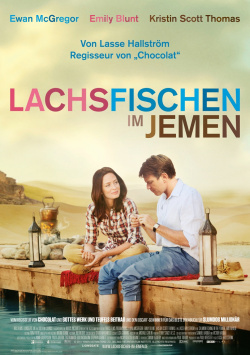 Salmon Fishing in the Yemen

Lasse Hallström is a true master when it comes to emotional cinema of a very special kind. Whether it's God's Work and the Devil's Contribution, Chocolat, Gilbert Grape or Hachiko, Hallström always succeeds in filling the hearts of his audience with great emotion, which also gladly results in a wet hanky or two. With his latest work, the film adaptation of Paul Torday's novel Salmon Fishing in the Yemen, the Swedish director remains true to his craft and shows how beautiful it can be when you are allowed to laugh and pine in equal measure at the cinema.

The film tells the story of shy fishing expert Dr. Alfred Jones (Ewan McGregor), who one day receives an unusual offer from Harriet Chetwode-Talbot (Emily Blunt) that he initially thinks is a very bad joke: Harriet's client, the heavily wealthy Sheikh Muhammad ibn Zaidi bani Tihama (Amr Waked), plans to settle northern European salmon in his homeland. Money would play no part in this. Although Alfred initially shrugs off the venture as completely unfeasible, he soon gets pressure from above. Patricia Maxwell (Kristin Scott Thomas), the prime minister's press secretary, sees the project as the perfect opportunity to offer voters important positive images from the Middle East. And so the salmon expert must rack his brains over how to successfully implement this insane assignment. The fact that Harriet, of all people, who has just lost her boyfriend in Afghanistan, is constantly on his mind doesn't make things any easier...

Following the Nicholas Sparks adaptation The Shining of Silence, Lasse Hallström takes a no less romantic but much more humorous approach in Salmon Fishing in the Yemen. With a lot of British wit of the particularly dry kind, Kristin Scott Thomas as the ice-cold calculating press spokeswoman with a wicked mouth repeatedly provides some really good laughs. But also the relationship between Alfred and his somewhat emotionless wife Mary is just too delicious thanks to the wonderfully shy performance of Ewan McGregor and an extremely dominant Rachael Stirling in contrast. More unromantic and at the same time amusing coitus has not been performed in cinema for a long time.

So it is more than understandable that the stiff Alfred has to fall in love with the fun-loving Harriet sooner or later, especially since Emily Blunt fills this character with life just adorable. Hallström finds just the right tone with her that while the audience grieves with her for her boyfriend, at the same time you wish Harriet and Alfred would come together. The director has already mastered a similar war-induced love triangle first-rate in God's Work and the Devil's Contribution, and here he again manages to resolve it in a way that feels romantic, touching, but never cheesy.

But the other aspects of this beautiful story work really well, too. Basically, the film does exactly what Patricia wants it to do by reporting on the successful settlement of salmon in Yemen: it finally shows a different picture of the problems in the Middle East in the cinema than the ones that have been repeatedly beaten around our ears in melancholy arthouse flicks for years now. Admittedly, one could accuse the film of trivializing the issues in favor of its entertainment value. But by embedding the conflicts in a very nice story that just makes its audience happy, Hallström makes them seem a lot less manipulatively presented than many a drama does.

More would have been completely out of place here, too, because ultimately Salmon Fishing in Yemen is about the love of life and the firm belief that anything is possible if you just believe hard enough. It is possible to change your entrenched life, to find your great love in a world filled with hate and war, and to bring hope to people who thought their hope was already lost. With great actors, wonderful pictures and a lot of humor, a good book became a real feel-good movie with bite and heart. And that's exactly what makes Salmon Fishing in Yemen: absolutely worth seeing!

Cinema trailer for the movie "Salmon Fishing in the Yemen (Großbritannien 2011)"
Loading the player ...