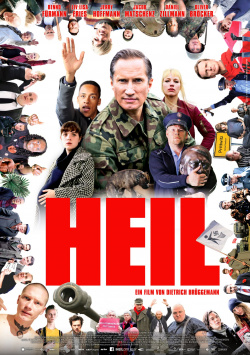 Heavily pregnant Nina (Liv Lisa Fries) is less than thrilled that her boyfriend, the celebrated Afro-German author Sebastian Klein (Jerry Hoffmann), is to present his bestseller about everyday racism in, of all places, the eastern German province. And the worry is justified: because at the train station in the small town of Prittwitz, Sebastian is met not by enthusiastic fans, but by a group of neo-Nazis who take him to the cellar of their local group leader Sven (Benno Führmann). Stupidly, the author has lost his memory due to the blow he received from his welcoming committee and now blithely parrots everything that is said to him. For Sven, this is the perfect way to spread his brown ideas to the people via the media. While Nina searches for her Sebastian with the help of the frustrated village policeman Sascha, Sven lets him rail against integration in talk shows. Too bad that Sven's beloved, the tough Nazi bride Doreen (Anna Brüggemann), is not very impressed. If you want to win her over, you'll have to be more assertive. And so Sven, with the help of his henchmen Johnny (Jacob Matschenz) and Kalle (Daniel Zillmann), strikes the big blow - and Sebastian is always right in the middle of it...

Do you get to laugh at neo-Nazis? How far is it allowed to ridicule the constitutional protection? And how politically incorrect can a satire be? With Heil, filmmaker Dietrich Brüggemann tries to give answers to these and other questions. On the surface, the versatile director's latest film (Kreuzweg, Renn, wenn du kannst) is a comedy in which right-wing radicals are portrayed as complete idiots. If the film were limited solely to that, Brüggemann could have been accused of making it too easy. Then Heil wouldn't have worked either. But Brüggemann fortunately doesn't limit himself to the all-too-obvious, one-sided Nazi bashing. Instead, he goes for a satirical all-round hit, in which really everyone - including him - gets their money's worth.

In doing so, he makes use of very different forms of humour. There's pure slapstick, top-notch slapstick, and satire extracted from exaggerated clichés. Somewhere between Mel Brooks, Monty Python, Loriot and Billy Wilder influences from the most different camps of cinematic humor can be recognized. It doesn't always work, but it usually does. And especially when Brüggemann dares to be really nasty, there is not a dry eye in this farce. When the Federal Office for the Protection of the Constitution is overwhelmed by the transmission of a web address, when the antifascists are at each other's throats because they perceive every statement that deviates even slightly from their ideals as right-wing, when the issue is used in political talk shows for the self-congratulation of inflated egos or when the federal states from the tri-border region of Thuringia, Brandenburg and Saxony trip themselves up with their different V-men, then it becomes very clear that Heil is anything but a flat comedy.

The biting dialogue was sometimes inspired by the tone of voice that many users display on Internet forums. In this way, Brüggemann also exposes a prevailing dogmatism, especially on topics such as neo-Nazis or the NSU, which leaves no room for constructive discussion. Especially when it comes to such important topics, people usually don't talk to each other, but only against each other - even when they are actually pursuing the same goal. Again, it is the political talks in the film, but also scenes on a demo against Nazis, which underline this excellently.

The actors, especially Benno Fürmann and Jacob Matschenz, display an enormous joy in acting, but also first-class comedic timing. Thus, they make sure that the film works very well even in the somewhat sillier scenes. Sure, the comedy's humor is definitely not everyone's cup of tea. And some people - and that doesn't only mean people with right-wing views - might feel a bit too much on the nose to be able to laugh a bit self-reflective about the turbulent events. But if you can get involved with the very special humor of this biting satire, if you are willing to let your little grey cells be activated even in comedies and if you like it politically incorrect from time to time, you shouldn't miss this film. Absolutely worth seeing

Cinema trailer for the movie "Heil (Deutschland 2015)"
Loading the player ...