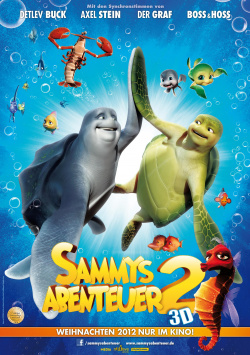 The time of great adventures is actually long over for Sammy (voiced by Detlev Buck) and his buddy Ray (Axel Stein). All the two really want to do is enjoy their well-earned turtle retirement and watch their grandchildren take their first steps into their exciting lives. Movement is really only called for when a ravenous seagull has to be kept from eating the turtle offspring. But rest is over when Sammy and Ray are caught by fishermen and shipped off to a giant underwater aquarium. But instead of entertaining the wealthy tourists there, the crafty turtles immediately seek a way back to freedom. Too bad there's someone in the aquarium who wants to prevent such a way from being found at all costs. But rescue is at hand! For the little turtles Ricky and Ella have followed their grandpas and come up with a spectacular plan to free Sammy, Ray and their new friends.

Now, after the great success of the first part, Sammy's Adventures 2 comes to the cinemas once again in a smart 3D look. It is in itself very nice that the filmmakers tell the story from the predecessor, which was already stolen together, not again only slightly varied, but visibly try to offer something new. Although there are quite a few familiar elements to be seen here, Sammy's second film adventure really is a stand-alone sequel. Sammy is an aged turtle, who is therefore no longer voiced by Matthias Schweighöfer, but by his Rubbeldiekatz director Detlev Buck. At the beginning, the terrible suspicion arises that Sammy and Ray are demoted to minor characters because of their age and that their grandchildren Ricky and Ella are the real heroes of the new film. Thankfully, this is not the case. While there is definitely a lot of time given to the cute turtle kids and their rescue attempts, the hero of the film is and remains Sammy.

The very big plus point of the film is its visuals. Even if the character drawing can't match the quality of comparable films like Finding Nemo, the underwater world created here is absolutely fascinating and beautiful to look at - no matter if it's directly in the ocean, or in the huge aquarium. Thanks to the well-implemented 3D effects and the resulting spatiality, the viewer can really immerse himself in the magical world. Especially the little Sammy fans should really like this.

They will also find the story extremely exciting and the humor really funny. And that's actually the most important thing in a movie that's clearly made for a young audience. But since Finding Nemo has shown that it is possible to create underwater animation that not only children will enjoy, the weaknesses of Sammy's Adventure 2 should not go unmentioned. These are clearly due to the script. Some of the dialogues are really subterranean, the gags extremely dusty and the comedic timing is always off by a fin length. This is a shame in that it's easy to see that the film itself is full of nice and good ideas. It's just that the weak script simply fails to adequately execute them.

As I said, kids between the ages of 6 and 11 certainly won't be bothered by this. For them, there's suspense, humor, and plenty of great visual effects, which should be enough to keep little animation fans more than satisfied. However, it's more than doubtful that the film will succeed in doing the same for its adult companions. Therefore, Sammy's Adventure 2 is an entertaining children's film, but not a successful family film. Only worth seeing for little underwater fans!