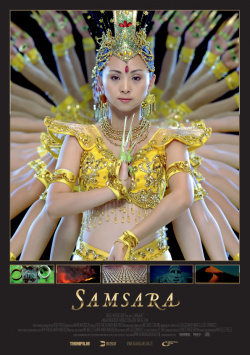 Samsara - a word from Sanskrit that denotes the eternal cycle of emergence and decay, of life and death. A cycle that Ron Fricke (Baraka) wants to trace in the form of a guided meditation. Together with his producer Mark Magidson, Fricke takes his viewers on a journey that leads through dreamlike landscapes, observes religious rituals, reveals people's delusions of grandeur, expresses the discrepancy between tradition and modernity, between nature and industry, between rich and poor, between happiness and despair.

Whether it's cinematic revelation or just the world's longest screensaver, Samsara is sure to divide minds. One thing is undeniable: the images that filmmaker Ron Fricke and his team captured in five years on a journey through 25 countries are sometimes incredibly fascinating, stirring, beguiling, beautiful, disturbing. The cycle of life, so beautifully sung by Elton John, is captured here through precisely composed juxtapositions and interlocking visual cogs. The fact that Fricke does without any form of commentary and simply lets the images speak, is undoubtedly the great strength of the film, even if the music in some moments has slightly annoying tendencies.

However, the film also has to contend with some weaknesses that might make it difficult for some interested viewers to be completely captivated by the rush of images. For one, the film holds onto one motif for an unnecessarily long time in some moments. This is especially noticeable in the moments that deal with suffering, weapons, waste and poverty. In addition, Fricke uses images here that do not have the very special uniqueness that otherwise makes up large parts of the film. Those who have seen documentaries like Plastic Planet, We Feed the World, Plug & Play, or Taste the Waste will rediscover some very familiar shots here.

In addition, there are some somewhat odd sequences, such as a somewhat disturbing face performance, that, at least at first glance, don't seem to want to fit into the otherwise very coherent overall picture and just seem like unnecessary filler. Moments like these make it hard to see Samsara as a complete work and not only in parts as convincing. But those who can overlook these weak points (or don't see them as such), and who just want to go on a very special spiritual journey in the cinema, will definitely get their money's worth here. Therefore: with restrictions for interested viewers well worth seeing!