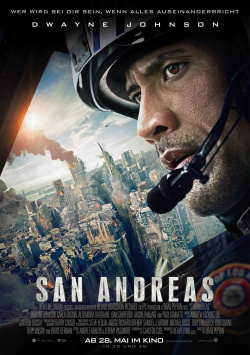 As a rescue pilot, helicopter pilot Ray (Dwayne Johnson) has already saved many a life. But his own marriage to Emma (Carla Gugino) could not save him from failure. But the impending divorce becomes the least of the couple's problems as the San Andreas fault shifts and a destructive 9 magnitude earthquake strikes California. The quake was just the harbinger of another monster quake that will hit San Francisco particularly hard. And that's where her daughter Blake (Alexandra Daddario) is, who tries to get to safety with the brothers Ben (Hugo Johnstone-Burt) and Ollie (Art Parkinson). Her parents are on their way from Los Angeles to San Francisco to save Blake. But they will arrive in time before the big monster quake destroys the city?

"San Andreas" is the second collaboration between Dwayne Johnson and director Brad Peyton after "The Journey to the Mysterious Island". With a slightly larger budget, Peyton, who hasn't exactly stained himself with fame with movies like "Cats & Dogs - The Revenge of Kitty Kahlohr", tries his hand at a stuff Roland Emmerich would probably have licked his fingers after a few years ago (if he hadn't already staged a very similar disaster movie with "2012"). The effects are partly really neat and those who like the genre will get their money's worth in some scenes.

But as soon as the focus shifts from destruction orgy to interpersonal, Peyton reveals once again that he is simply not a good filmmaker. The dialogues are bad for running away and the dramaturgy isn't just one big cliché, it's also completely unnecessary. The best example of this is a scene in which Ray and Emma, after several difficulties with a small plane, want to travel the rest of the way to San Francisco. Time is of the essence and your daughter's life is in real danger. But instead of flying off right away, the two of them first manage their marriage problems in an unbearably long conversation. Anyone who has come up with the great idea that the target audience wants to see a crying Dwayne Johnson at this moment really has no idea about filmmaking.

Even when you accept all the scenes that move far from any logic and try to get carried away by the action, the "dramatic" scenes with their "family is the ultimate good" woodhammer message are so intrusive and often involuntarily funny that it's just annoying. "San Andreas" could have been a really thrilling adventure, if the script had had more courage for originality and self-irony and if the staging hadn't been so thick. So there is always something for the eye, but that doesn't help much if the ears are poisoned with such bad dialogues. Although I personally am normally quite available for such movies and despite all my weaknesses I had a lot of fun with the very similar "2012", there is only one thing for this 3D fuss: as a brain-free popcorn cinema, it is only worth watching with a few exceptions!