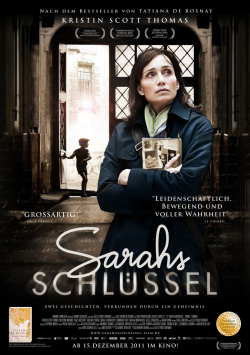 Already featured in the poignant drama The Children of Paris, the recent Rafle du Vélodrome d`Hiver, the cycling track roundup of 16. and 17 July 1942 in Paris, in which several thousand Jews were arrested by the French police and subsequently deported to concentration camps. And this terrible event also plays a central role in Sarah's Key, the film adaptation of Tatiana de Rosnay's international bestseller.

For ten-year-old Sarah (Mélusine Mayance) and her parents are among those dragged from their apartment by the police in the middle of the night. At the last moment, Sarah manages to lock her little brother in a hiding place in the wall. She leaves the little boy with a promise to return soon. She takes the key to the secret door with her. In doing so, Sarah has no idea of the ordeal that awaits her and the nearly 20,000 other Jews who have been arrested.

The events of July 1942 are of interest 67 years later to American journalist Julia (Kristin Scott Thomas), who, while researching the raid, discovers that the apartment where she plans to live with her future husband Bertrand (Frédéric Pierrot) was also home to a Jewish family who were forced out of their home during the mass arrest. The deeper Julia delves into the traumatic history, the more closely her story intertwines with Sarah's and the fate of her little brother...

Sarah's Key by Gilles Paquet-Brenner (UV, Walled In) is a very poignant and intense adaptation of the acclaimed novel. What the production deserves credit for is its avoidance of overly obvious shock moments. True, the film doesn't gloss over the gruesome events or show only pretty pictures. But overall, Paquet-Brenner leaves the worst elements unshown, but still manages to make the audience feel them. In one scene in particular, this benefits the film greatly. Instead of shocking the viewer with gruesome images here, the director simply shows the pain and horror in the protagonists' faces. And this has a much stronger effect than more direct images could have created.

The switching between the different time levels also works very well. In this, the quiet moments that follow Julia in her research allow us to take a more relaxed breath for once between the horror of the events of 1942. While Sarah's Key deals with a very heavy subject, these periods of relaxation ensure that this drama is not crushed by the extreme heaviness of the story. Rather, this has resulted in a very beautiful film in all its tragedy and cruelty, which can move the viewer to tears, but does not leave him completely depressed at the end. A story full of suspense, intensity, emotion and quiet horror. Absolutely worth seeing!