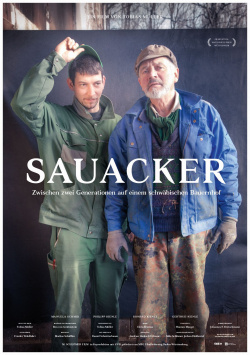 For almost three hundred years, the farm in a small Swabian community has belonged to the Kienle family. For many generations, farming has been done here, crises have been fought and tradition has been upheld. Now Philipp Kienle is about to take over the farm from his father Konrad. But the farm is in a deep crisis. Machines are outdated and in urgent need of renewal, milk production yields too little profit and numerous outstanding invoices simply do not allow for major new investments. Philipp has to face the facts: since 1990, the farm has been financially loss-making. And if he wants to save the family farm, he will have to make radical changes. Philipp has to convince not only the banks but also his father that these changes are necessary and worthwhile. But in the process he keeps running into walls, so that at some point he has to ask himself whether he really wants to go the same way as his father, or whether the fight for the farm is not completely hopeless.

In Sauacker, filmmaker Tobias Müller observes the generational change on a traditional agricultural farm. In doing so, Müller succeeds brilliantly in telling a very intimate family story on the one hand, but on the other hand it sheds light on a very universal topic. Unfortunately, there are too many people like Philipp Kienle, who give everything to keep a small family business alive, who have to slave away at other jobs and sacrifice their private lives for it. Watching the young man give it his all and yet only have to face setbacks time and again is extremely moving. Precisely because Müller simply observes and keeps himself completely out of it, his film achieves a very great emotional impact.

The efforts to preserve small farms like the Kienles' farm sometimes seem like a battle against windmills, a confrontation of David against Goliath that cannot be won. To see that there are people who nevertheless do not give up and do not surrender to bureaucracy and powerful large corporations is admirable and, in the case of Sauacker, also absolutely rousing. Spiced with a pinch of Swabian humor and some beautiful images, the documentary thus becomes a Heimatfilm of a somewhat different kind, which, in addition to its very personal side, is also full of socio-political relevance.

However, the not exactly easy father-son relationship of Philipp and Konrad Kienle is actually the focus of the story. While the situation for father Konrad is only a valley, on which soon also again a hill comes - otherwise he would be already long ago no more there - and that one can repair also old machines still, instead of buying immediately new ones, Philipp is just conscious that he must make heavy and also hard decisions, if he wants to have here a future. Decisions that his father won't like at all. This becomes particularly interesting when Konrad Kienle talks about his relationship with his father and reveals how difficult it was for him at the time until he was finally allowed to take over the farm. For the stubbornness he had to fight back then, he has now developed towards his son's ideas.

Sauacker is a charming film, which in its understated way is not only interesting and very entertaining, but also important on a certain level. If you appreciate entertaining everyday documentaries and want to get a glimpse into a working world in danger of extinction, this film is not to be missed. Worth seeing

Cinema trailer for the movie "Sauacker (Deutschland 2013)"
Loading the player ...