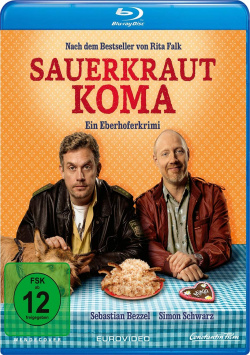 Film: Eberhofer Franz (Sebastian Bezzel) is back on duty. He has just put his relationship with his girlfriend Susi (Lisa Maria Potthoff) on the right track, when the mayor (Thomas Kügel) puts a spoke in his wheel: He transfers Eberhofer to Munich. What a horror! Here the commissar from the contemplative Niederkaltenkirchen has to share an apartment with Rudi (Simon Schwartz), is supposed to work with other policemen in the team and to top it all off his new superior is also Elisabeth Mayerhofer (Nora Von Waldstätten), with whom he had a violent clash in the "semolina dumpling affair". As if that wasn't bad enough already, an old schoolmate approaches Susi in the meantime and Eberhofer's dad (Eisi Gulp)'s car is stolen - only to reappear a short time later with a corpse in the trunk. But of course Franz Eberhofer can't be disturbed by all this…

"Sauerkrautkoma" is the fifth adaptation of Rita Falk's popular Eberhofer thrillers. The previous films have attracted more than 2.4 million visitors, mainly to cinemas in Bavaria. But the steadily increasing success - also with TV broadcasts - ensures that the films are increasingly shown in cinemas outside the veal sausage equator. No wonder, then, that Part 5, with over 1 million cinema-goers throughout Germany, is also the most successful film in the series to date. Director is once again Ed Herzog, who implemented the book with a sure routine. Big surprises are not to be expected during the production, rather the inclined spectator gets exactly what one can expect after four Eberhofer films.

The beginning is a bit bumpy, though. There are some very amusing dialogues and funny moments, but overall the humor seems to be a little bit too stressful and overwinding. But before something like real disappointment can happen, the movie finds its pacing and its very special tone and then works just as well as its predecessors. However, the actual criminal case becomes a minor matter this time as well. Rather, it is about the marvellous, weird figures, above all about Franz Eberhofer, who is simply congenially embodied by Sebastian Bezzel.

The interplay between Bezzel and Simon Schwarz is a good reason for some really hearty laughs, especially when it comes to a rather involuntary living together. The relationship problems between Franz and Susi, on the other hand, seem to be dying slowly. However, at the end the movie gets its way again - and we don't want to go into that at this point, in order not to reveal one or two nice surprises. But let me say this much: Franz and Susi's relationship is what dominates the last ten minutes and what makes for a few wonderful moments here.

"Sauerkrautkoma" is not the best part of the Eberhofer series, but offers enough weird fun and dry wordplay to comfort you over a few small weaknesses. Anyone who liked the first four films will have a lot of fun here again - and is already looking forward to Part 6, which will be released in 2019. Absolutely worth seeing!

Picture + sound: A good overall impression also remains here. The picture is absolutely clean and has a good overall sharpness. Contours are clearly drawn and even smaller details come into their own. The colouring seems a little excessive, but this seems to be a deliberately used stylistic device. The sound is available as a DTS-HD Master Audio 5.1 mix, which is quite discreet over long stretches, but sounds pleasantly powerful, especially with the musical interludes. Good.

Extras: The bonus material is really worth seeing. The heart of the extras is a Making of (approx. 31 min.), which deals with the story and the production of the film. There are also some amusing behind-the-scenes clips showing Susi looking for a partner (approx. 1:10) and Rudi undercover (approx. 1:15), offering a Thai course by Leopold (approx. 2:33) and an Eberhof film quiz with Sebastian Bezzel and Simon Schwarz (approx. 5:14). In addition there are two music videos and the trailer for the film. Good.

Fazit: "Sauerkrautkoma" is not the best, but it is the most successful part of the Eberhofer series of five films to date. A Mords-Gaudi with a great ensemble and weird humor, which fans of the previous movies shouldn't miss. The Blu-ray can convince in terms of picture and sound, as well as in the extras across the board. A very clear purchase recommendation!