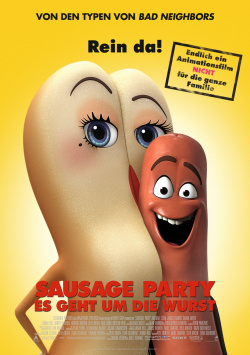 Sausage Party - It's all about the sausage

Cheering on the supermarket shelves: A big holiday is coming up and that means people are doing their bulk shopping. For the groceries, it's a great chance to escape from their dull existence In the supermarket and find great happiness in the world outside. Especially for sausage Frank and hot dog bun Brenda, who are madly in love with each other, now is their chance to be freed from their wrappings and finally be united. Oh, what a treat that would be. But then doubts arise in Frank's mind that paradise really does await beyond the supermarket checkouts. When he and a troop of other groceries discover the truth about their fate in the outside world, a merciless fight for survival begins for sausages, buns, potatoes and co.

Oh, an animated film with funny talking sausages - well I'm going in with my dear little children. Just don't!!!! Because Sausage Party is a lot of things - just not a kids' movie! In the US, the crude fun was the first computer animated film to get an R-rating. And for good reason. Because in the story devised by Seth Rogen, Evan Goldberg and Jonah Hill, things get pretty rough. Always below the belt, often politically incorrect and also damn brutal. That the authors have consumed certain substances while thinking up and writing down the story, which also play a major role in the film, should be out of the question in view of the completely crazy story. But between countless quips and jokes, the script also has some really original and profound gags to offer, which in the end, however, do not necessarily stick in the memory.

Because towards the end there is a sequence that probably no viewer will ever forget again. It will be hard for many to walk through a supermarket with pure thoughts again after that, let alone eat things like hot dogs. And whoever still thought that a movie with talking food is only for kids will be disabused here at the latest. Believe me: you don't want to have to answer the questions that would arise in little viewers! And that the little ones are already traumatized by the sight of a sausage, certainly no one wants.

But all joking aside, Sausage Party is a movie that's really only fun to watch in a larger, well-behaved group. Plus, you can't be too squeamish when it comes to sex, drugs and violence. A soft spot for late puberty humor should also be present. Then, but only then, this grotesque animation flick is a lot of fun. Who generally has a problem with the films of Seth Rogen and consorts, however, will leave the cinema in despair after ten minutes at the latest.

It is a pity that the great potential behind the story was only marginally exploited in favor of countless sex jokes. The flick would have definitely had the makings of an absolute cult film if the makers had paid a little more attention to the satirical aspects of the story. These are present, but largely go under. Nevertheless, even if many gags are set too low below the belt, simply do not ignite or are too shallow, the fun factor is still very high. It's just a pity that many of the word jokes can't be translated into German, so that some of the jokes got lost in the dubbing. But if you let yourself in for it, you'll get something here that you won't forget in a hurry. And for that there is then also a deserved: Worth seeing!

Cinema trailer for the movie "Sausage Party - It's all about the sausage (USA 2016)"
Loading the player ...