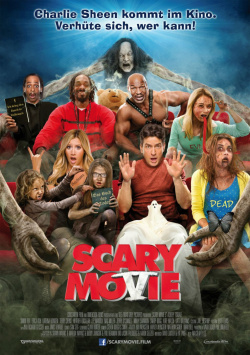 After a seven-year hiatus, the most successful spoof comedy franchise is back: With Scary Movie 5, producer David Zucker tries to build on the great success of its predecessors by once again making fun of everything that is supposed to cause fear and terror. Whether the Paranormal Activity films, the mystery thriller Black Swan, the fantasy hit Inception or the brand-new genre contributions Mama and Evil Dead, here again is made fun of what the stuff holds. The gags are embedded in a very rudimentary frame story, in which the young married couple Jody (Ashley Tisdale) and Dan (Simon Rex) agree to take care of the children of Dan's brother Charlie (Charlie Sheen). For three years, the little ones have lived on their own in the wilderness and now, of course, are having trouble adjusting to the normal lives of their new parents. And as if that wasn't problematic enough, strange events start to pile up in the family's home that even the numerous cameras scattered around the house can't resolve. To make matters worse, Jody is also in big trouble at the ballet company, where she has to deal with a very stubborn competitor. And Dan has to deal with truly animal problems at his job in a monkey research center. It's a truly paranormal mess that - how could it be otherwise in a horror story - culminates in a cabin in the woods.

Admittedly, in direct comparison to the unspeakable spoof comedies from the house of Friedberg and Seltzer (Fantastic Movie, My Wife, the Spartans and Me, Beilight), Scary Movie 5 is downright funny. But there's no sign of Zucker's humorous genius, which made films like The Naked Gun or The Incredible Voyage in a Crazy Airplane classics that still work really well today, in the fifth rehash of the horror spoof. The few really good laughs are almost completely buried by flat zaniness and unfunny fecal humor served up with a sledgehammer.

The problem with contemporary spoof comedies is that they no longer target genres per se, as the classics of yore did, but only very specific films. By only humorously spoofing the latest works and characters, the films are robbed of any chance of a long-term effect in an increasingly fast-moving pop culture. A curious side effect is that the effort for topicality culminates in the fact that some satirized movies have just been released or even not yet, and these gags more or less fizzle out. In the case of Scary Movie 5, this is the remake of Evil Dead, which opened in the U.S. just a week before the spoof was released, and in Germany it even hits theaters just a few weeks after. But since the gags are quite specific to the remake, some potentially successful laughs are completely lost here. Allusions to reality TV starlets like the Kardashians or the currently very popular book series Fifty Shades of Grey may currently provide a slight smile, but will see en film in a few years, will only wonder what this nonsense is supposed to. All these are proofs that spoof comedies have degenerated into rather loveless throwaway products that achieve laughs not by clever and also affectionate handling of genre clichés, but by a very simplistic recognition effect, only to be forgotten right afterwards.

Besides that, the jokes just aren't very clever. Either cartoonish violence, or cheap sex and fart gags are served up. And that's just not funny anymore in the long run. It doesn't help that Ashley Tisdale actually does a good job as Anna Faris' replacement and that some guest appearances, like the completely absurd intro with Charlie Sheen and Lindsay Lohan or the disarming scene with Snoop Dog, are quite amusing. Those who liked the first Scary Movie films are guaranteed to find Part 5 the weakest sequel in the series. And only those viewers who have enjoyed persiflage like Breaking Wind or Date Movie will be able to laugh heartily anyway. Therefore: apart from a few funny moments, unfortunately, not a particularly successful persiflage, but even just the bare horror!