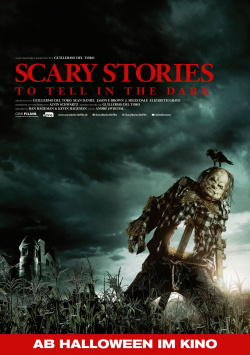 Scary Stories to tell in the Dark

1968: Halloween is just around the corner in the small town of Mill Valley. Especially for the children and teenagers the highlight of the year. Stella (Zoe Margaret Colletti) and her friends end up on this spookiest of nights at the former Bellows family estate, which has been considered a haunted house for years. Here they find a mysterious handwritten book of eerie tales, written by a certain Sarah Bellows. Stella takes the book with her, unaware that she is about to bring great misfortune upon herself and her friends. Suddenly new stories appear in the book, which become a terrible reality for the children. But how are the children to stop the vengeful spirit of Sarah bellows before they all fall victim to her stories?

Scary Stories to Tell in the Dark is based on the popular scary books by Alvin Schwartz. Director Andr&eacute; &Oslash;vredal and co-writer/producer Guillermo del Toro have turned the original into an atmospheric scary movie for a younger audience. It's sort of the next step up from the first installment of Goosebumps - never truly gruesome, but scary enough to no longer be a kids' movie. Die-hard horror fans will probably only be able to smile wearily at this, but will have to concede the film does its thing really well as a genre entry.

At the same time, del Toro's influence is more than evident, especially in the visuals. It is thanks to the atmospheric set and creature design that even viewers beyond their 20s can thoroughly enjoy this flick. Certainly, a rather simple scary story is told here, which offers few surprises especially to connoisseurs of the subject. But the realization is really successful and has to offer some really creepy moments, especially for the fact that the film is aimed more at teenagers. I was sure while watching the movie that I would have loved it as a teenager. And that's exactly why I still really liked it as an adult.

Charmingly drawn characters, a nostalgic creepy vibe, and some on-target humor don't make Scary Stories to tell in the Dark a masterpiece, but it does make it a very entertaining goosebump inducer for anyone looking to slowly introduce themselves to the horror genre. For this there is clearly a: worth seeing!

Cinema trailer for the movie "Scary Stories to tell in the Dark (USA 2019)"
Loading the player ...