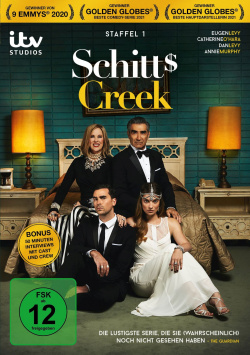 content: Shock for the heavily wealthy video store magnate Johnny Rose (Eugene Levy) and his family: their entire fortune is gone. The Roses are now left with nothing. All they have is the small town of Schitt's Creek, which Johnny gave his son David (Daniel Levy) as a birthday present years ago as a joke. With their last belongings, Johnny, his wife Moira (Catherina O`Hara) and their grown children David and Alexis (Annie Murphy) have to move into a not-so-nice motel in Schitt`s Creek. While the head of the family tries to replenish the family bank account, the Roses willy-nilly have to mingle with the small-town folk of Schitt`s Creek - and that`s truly where two completely different worlds collide...<p/p>

For six seasons, "Schitt`s Creek" ran from 2015 to 2020 in the U.S., where the Canadian comedy series has slowly gone from insider tip to absolute audience favorite. The highlight was the 2020 Emmy Awards, where the final season of the series picked up all seven top prizes in the comedy category. What makes the series so special isn't quite as clear in the first season as it is in later episodes, to be sure. But already at the beginning of the new life of the Rose family, the series can convince with its very special characters and a mixture of very direct and on the other hand deliciously subversive humor.

The characters - especially the complete Rose family, as well as Roland Schitt, played by Chris Elliot ("Crazy for Mary") - seem at first still badly overdrawn, which makes an access to them somewhat difficult. But little by little - and that's where the real strength of the series lies - these characters really grow on you and you want to spend as much time as possible with them in the small town. So it's really worth giving this series a chance, even if the igniting spark in the first episodes should not jump over yet.

Now to the German dubbing: This is not bad, but unfortunately can not hold a candle to the English original. Moira's way of speaking alone just can't be translated into German. Her wonderfully exaggerated accent, through which she wants to distinguish herself as a successful actress and woman of the world from the common people, is simply delicious and only comes into its own in the original version. But also otherwise the wordplay and the way it is delivered (especially by David and Alexis Rose) is one of the strong aspects of the series, which can only really unfold in the English original. Even though I usually like to be an advocate of the work of dubbing actors and directors, here my tip is quite clear: Definitely choose the English soundtrack - if necessary with German subtitles.

"Schitt`s Creek" is a really amusing comedy series, which gradually moults to the funny, as well as charming feel-good food for the soul. Definitely give the series a chance, because it gets better and better with each season! The first 13 episodes are not perfect yet, but a lot of fun, charm and heart are already guaranteed here. Therefore applies to this double DVD quite clearly: Absolute purchase recommendation!!!

Picture + sound: The DVD's image pleases with decent overall sharpness and punchy color. These aspects are especially noticeable in the outdoor scenes. The sound is dominated by the dialogue, which sounds a bit more directionally mixed in the German language version than in the original English version. All in all, for a comedy series, a good to very good audiovisual realization!

Extras: As a bonus, the second DVD features extensive on-set interviews with Eugene Levy (approx. 7:55 min.), Catherine O`Hara (approx. 7:12 min.), Daniel Levy (approx. 9:12 min.), Annie Murphy (approx. 4:46 min.) and Chris Elliot (approx. 5:42 min.), as well as with the two directors Jerry Ciccoritti (approx. 7:30 min.) and Paul Fox (approx. 5:57 min.). Even though the interviews seem like common promo material, you can learn quite interesting things about the making of the series. Especially Daniel Levy, who developed the characters together with his father and is also involved in the scripts and the production, provides some very revealing details. It's just a shame that the extras of the US DVDs (outtakes, webisodes, deleted scenes) didn't make it onto the German DVD as well.

Conclusion: "Schitt`s Creek" is - as the Guardian so aptly put it - the "funniest series you (probably) haven't seen yet". In the U.S., the comedy series has gone from insider tip to absolute audience favorite in its run of six seasons. Even if the first episodes don't quite reach the class of later seasons, the first 13 episodes are full of quirky humor and heartwarming charm. The DVD presents the season in good picture and sound quality and also includes interesting interviews as a bonus. All in all, a very clear case of: Absolutely recommended!!!