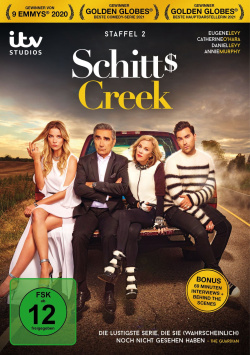 Content: Such bad luck, though: after failing in their attempt to sell the town of Schitt`s Creek, the Rose family remains trapped in the backwater. Even son David`s (Daniel Levy) attempt to escape back to New York fails. Now head of the family Johnny Rose (Eugene Levy) must worry about building a new business that will bring prosperity back to the family. Meanwhile, his wife Moira (Catherina O`Hara) uses the time to join a local singing troupe, while David tries his hand as a salesman at the local fashion boutique. And Alexis (Annie Murphy) faces real emotional chaos: should she choose veterinarian Ted (Dustin Milligan) or handsome but rather simple-minded Mutt (Tim Rozon)?

The audience and critic favorite "Schitt`s Creek" is entering its second season. Here the series, which ran for a total of six seasons, has slowly but surely reached the quality that then distinguished it until the finale. If the humor in the first episodes could not always score, the creators around the father-son duo Eugene Levy and Daniel Levy have now found the perfect tone: A mixture of cynicism and wordplay, coupled with lots of heart and charm. The Rose family, still struggling to come to terms with the loss of their fortune, slowly realizes that they will be staying with the small community for an extended period of time, and so the family members tentatively try to integrate into the community - which isn't always successful, but is pretty darn funny.

The series plays with clichés, of course, but skillfully avoids becoming an interchangeable "two-worlds-collide" story. The characters are unique in their own way, and the situations created by the differences between the small-town folks and the snobbish Roses are wonderfully original. But the fact that "Schitt`s Creek" works so well is not only due to the very good scripts. The great ensemble also plays a supporting role. Because a lot of the joke doesn`t necessarily come from what is said, but rather from how it is conveyed. An incredible amount of facial expressions are used - and in such a great way. For example, when Alexis pours her heart out to her brother after a breakup and suddenly says she needs a hug, it's David's facial expression that lends this situation tremendous comedy. Likewise, David's facial expressions make his job interview with the owner of the small fashion boutique in the village a real feast for the laughing muscles.

Actually, people like the Roses are not supposed to be likeable. They are so egregiously me-centric that it almost hurts. But the genius of the show is that it manages to make these characters seem somehow charming. That's also done even better in this second season than it was in the already very good first season. Although almost all of them should be unlikable, the Roses and the inhabitants of Schitt's Creek grow closer and closer to your heart. The creators manage to do this in a pleasantly subtle way that carries over to other aspects of the series.

Because "Schitt`s Creek" is funny without being flat and warm-hearted without being corny. It is a series that makes you happy without pandering to the audience and that conveys tolerance and open-mindedness without ever coming across as too lecturing or bitter. In short, this series is a true rarity in the world of modern comedy series. And for season 2, I advise again: as good as the dubbing may be, the true quality of the series only becomes clear in the original sound, which is available on the DVD with optional German subtitles! For me personally next to "Ted Lasso" the best and funniest feel-good comedy series of recent years! Absolutely watch!!!

Picture + Sound: Here everything has remained the same compared to the first season: Warm, powerful colors and decent overall sharpness leave a very positive overall impression, especially in the outdoor scenes. The Dolby Digital 5.1 mix is dominated by the dialogues, which sound a bit more directionally mixed in the German language version than in the original English version. All in all, again an audio-visual conversion on good to very good TV level!

Extras: As a bonus there is on the second DVD, an approximately 15-minute look behind the scenes, whereby it is uncommented B-Roll footage. There are also nine promo interviews with the cast ensemble. While this remains largely superficial, it does always have some interesting facts to offer about the making of the series. In total, there are just under 70 minutes of bonus material. Good!

Conclusion: "Schitt`s Creek" has found in season 2 clearly better his tone and rhythm. While the first episodes were already very good, the whole thing ramps up now, making it hard not to devour the season in one piece. This is feel-good comedy at its best, and you shouldn't miss it. The double DVD presents the series in good picture and sound quality, and as a bonus there are plenty of interviews, as well as a look at the filming. A very clear case of: Absolutely recommendable!