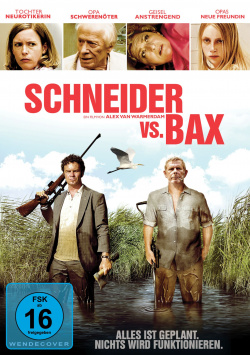 Film: Schneider (Tom Dewispelaere) is a loving husband, devoted father - and ice-cold hitman. He completes his assignments with absolute precision. Today is Schneider's birthday. His wife and daughters have prepared a lavish party. Nevertheless, he has to go out again and do a new, seemingly easy job: Schneider should kill the writer Bax (Alex van Warmerdam). He is supposed to live alone in a remote cottage. For Schneider the perfect location for a quick job. But unfortunately Bax has just been visited by his neurotic daughter, his grandfather and his much too young girlfriend. Now things get a little more complicated for Schneider than he thought. When he has to take a hostage, the situation threatens to get out of control. But even now he has no idea that this job isn't actually about taking out Bax, but that someone else entirely is in the crosshairs of his employer.

With Schneider vs Bax, Alex van Warmerdam delivers the highly anticipated follow-up to his cult film Borgman. Again, he manages to put very quirky characters in bizarre situations where they are confronted with unexpected twists and abstruse situations. The characters are completely overdrawn, but still somehow seem real and not like caricatures. The mixture of black humour, laconic wit and delicious slapstick also ensures that the entertainment value of this film has turned out to be so extremely high.

Admittedly, the story doesn't quite have the genius of Borgman. But when suddenly the signs are completely reversed and the professional killer becomes the target, then again an original play with the expectations of the audience takes hold, which not only by the story itself, but also because of the absolutely unpredictable characters always provides surprises. Even when you think you know what's going to happen next, the story makes the next unexpected change of direction. In doing so, van Warmerdam once again makes use of some very dark themes, which he manages to take away from, not its importance, but its dramaturgical weight.

Schneider vs Bax is not only funny, but provocative in places. The film is surprising, wicked and lets the viewer look into deep abysses of the human soul in a black-humorous way. If you liked Borgman or if you generally have a soft spot for weird, inappropriate comedies of the cryptic kind, you shouldn't miss this extremely successful work. Absolutely worth seeing!

Picture + Sound: Technically, the realization of the film is on a good level. The clean image is overall pleasantly sharp, only in darker moments some details here and there seem slightly washed out. The colors are powerfully mixed and provide especially in the many outdoor shots for a very good overall impression. The sound is relatively unspectacular, which is not surprising for a satire with relatively many taciturn moments. Dialogues and music come but well coordinated from the boxes, which is why there is still a good here.

Extras: Unfortunately, apart from the trailer, there are no extras to the film. Too bad!

Conclusion: Schneider vs Bax is quirky, wicked, weird and surprising. While not quite matching the quality of van Warmerdam's predecessor Borgman, this killer comedy still offers enough wit and delightfully weird moments to once again cement the director's cult status. The DVD pleases with a good audiovisual realization of the film. Only the missing bonus material clouds the overall impression a little bit. Nevertheless, the main film is easily enough to be able to attest the DVD an Absolutely Recommended