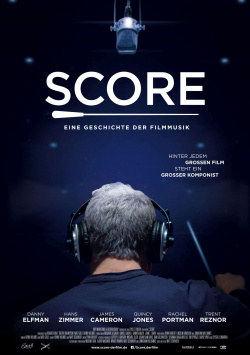 Score - A History of Film Music

On the home theatrical version of their film Swiss Army Man, the directors released an additional soundtrack without the score, for once very radically demonstrating to viewers how enormously important score and songs are not only to specific scenes, but to the overall cinematic experience. Imagine that with other films. The Great White Shark attacks without the legendary soundtrack, the shower scene from Psycho without the screeching strings, the opening lyrics of the Star Wars films without the incomparable anthem? Unimaginable.

With the documentary Score, Matt Schrader not only aims to introduce the often unknown faces behind great and memorable film scores. He also wants to explain the importance of music in the medium of film and get to the bottom of the secrets of some of the greatest composers of our time. The film is also, of course, something of a history of film music. It tells how film music has always had to adapt to the changes in cinema and how it has always had to reinvent itself. But one thing seems clear to all the composers, filmmakers and musicians interviewed: There is no substitute for the orchestral score and it will continue to lend cinema its very special tapestry of sound.

And at the latest when you hear the many unforgettable melodies that the film presents as examples, you may also agree with this thesis as a viewer. Because even though there may be some great electronic soundtracks, it's the orchestral sounds that stick in the collective consciousness - thanks to grandmasters like John Williams! He may only appear in archive recordings, but he gets the more than deserved credit from his peers.

For film music fans, however, the film is worth seeing not only because of the cinematic-musical journey through time. The sequences in which some composers offer insights into their working methods or talk about their profession with gratifying (and unvarnished) honesty also make Score a must-see for all friends of exciting documentaries and, of course, for all cinema fans. Therefore there is a very clear: Absolutely worth seeing!