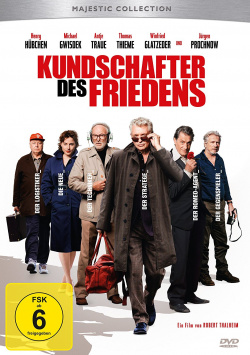 Film: The BND agent Frank Kern (Jürgen Prochnow) gets into an ambush initiated by the KGB, when he wants to bring the future president of Katschekistan from the country to an important peace conference in Berlin. Since the contact to their best agent is broken off and they run out of time, the responsible persons of the BND have only one choice: they have to ask the former GDR spy Jochen Falk (Henry Hübchen) to help them. Together with his former team - Jacky, the technician (Michael Gwisdek), Locke, the logistician (Thomas Thieme) and the once perfect seducer Harry (Winfried Glatzeder) - Falk is persuaded to join the mission. Finally, he has a score to settle with Kern, which he could also settle. Together with the young BND agent Paula Kern (Antje Traue), the pensioners let themselves be smuggled into Katschekistan, unaware that the mission will take place quite differently than planned…

The story of "scouts of peace" is actually a really good idea. Reactivating a group of retired agents and sending them to a crisis area with a young colleague is an amusing premise for an agent comedy. The old men are also absolutely perfect with Henry Hübchen and Michael Gwisdek. And director Robert Thalheim has also proven himself to be an accomplished filmmaker with films as diverse as "Westwind" or "Am Ende kommen Touristen". All good prerequisites, but not enough to produce a completely successful work.

The problem with comedy is that it is nice and entertaining, but nothing more. Here and there she shows the necessary bite, which is noticeably missing in other places. In some moments the whole thing just lacks the necessary momentum, while in other scenes it's just the comedic timing that doesn't work out. That's a pity because the ingredients are all right. The ensemble is well chosen - including Hollywood export Antje Traue - and plays with obvious fun in the whole thing. The story also has potential, which flashes through entertainingly here and there.

It's not quite clear whether it's the script, or the director, who repeatedly steps on the brakes before the full potential of the successful aspects can unfold. It's a fact that the movie weakens in exactly those points that actually make for great cinema entertainment. In fact, "Scouts of Peace" looks like solid TV entertainment: if you can watch it, it's also entertaining. But a little more courage for evil satire could have worked wonders here. Therefore, in the end, the only thing that is true is that everyone involved made an effort, but in the end, unfortunately, the film didn't come out that could have been the "scout of peace". Nevertheless, at the end there is still a good "worth seeing"!

image + sound: The picture of the DVD pleases with a good overall sharpness and a very atmospheric coloring. Since the black values and contrasts are also well balanced, the mood of the pictures can unfold well. The Dolby Digital 5.1 Mix has some nice surround moments to offer and also transports the dialogues powerfully from the home cinema boxes. Good!

Extras: The DVD has some nice extras to offer. It starts with two TV appearances by Henry Hübchen at WDR "Kölner Treff" (approx. 12:21 min.) and Michael Gwisdek at "Aspekte" on ZDF (approx. 11:47 min.). We continue with premieres interviews at a rather unusual location, namely on the cruise ship AIDA (approx. 25:13 min.). And finally the ambassadors meet for a conversation with a film journalist (ca. 14:07 min.). All these extras reveal some interesting details about the shooting, the backgrounds and the characters.

Fazit: "Scouts of Peace" has many good, sometimes even very good ingredients. Nevertheless, the movie doesn't manage to fully exploit its potential. But the DVD always offers entertaining entertainment for a relaxed and amusing home cinema evening. The technical implementation is convincing and the bonus material has some interesting interviews to offer. All in all there is one for it: Recommended!