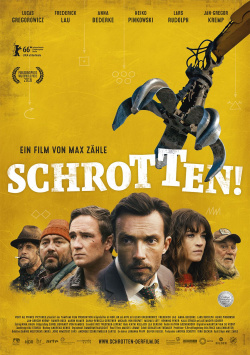 Years ago, Mirko Talhammer (Lucas Gregorowicz) broke away from his family's run-down junkyard to start his big career in the big city. But now he has to return to the unloved province once again, because his father has died. The junkyard now goes equally to him and his brother Letscho (Frederick Lau). While Letscho wants to keep the place at all costs to keep up the family tradition, Mirko wants to turn his share into money as soon as possible. He would even sell the place to Kercher (Jan-Gregor Kremp), his father's hated competitor. But it soon becomes clear to Mirko that Kercher is playing a rotten game and he realizes that even he, who had actually broken away from his family, is still a true valley hammer at heart. And so the two brothers must bury their hatchet in order to carry out their father's last great plan and give Kercher a run for his money in the process.

With Schrotten! Max Zähle now delivers his feature film debut as director after his Oscar-nominated short film RAJU. And for this mixture of comedy, family drama and heist movie he has chosen a really unusual microcosm: that of the scrap dealers. This makes for a refreshingly out-of-the-box atmosphere that, while made up of many familiar elements, feels unusual and original overall. Sure, the staging makes use of some very well-worn clichés. Still, the whole setting in which these familiar plot elements are incorporated feels like a breath of fresh air, allowing viewers to discover something new even when they're on the beaten path.

When the two brothers put aside their differences to put their father's latest plan into action, the entertainment value of the film increases significantly. Then the whole thing becomes a quirky junk version of classic heist movies like Ocean`s Eleven, and has some really neat ideas to offer in the process. Also, due to the relaxed acting of the well-chosen ensemble, the movie is really fun to watch for long stretches, despite some minor lengths. Sounds all well and good, but now comes a big BUT!

Because in the end Scrap! never seems like a feature film, but rather like a very good TV movie. That doesn't speak against the quality of the film. It is undisputedly good. But especially with German productions the differentiation between cinema and television is often missing and that is again the case with this co-production of Arte, HR and NDR. Even if the entertainment value is decent, the film lacks that certain something, especially in visual terms, that would offer viewers real added value on the big screen. And that is simply necessary to justify the money invested in the ticket, drinks and popcorn.

If you like small German comedies of the more quirky and unusual kind, this is definitely for you. And it is to Max Zähle's credit that he tried to tell a somewhat different story for once. But if you expect more than an entertaining and quite original TV production, you might leave the cinema a bit disappointed in the end. And therefore, despite many positive aspects, there is only one: Worth seeing with small restrictions!

Cinema trailer for the movie "Scrap! (Deutschland 2016)"
Loading the player ...