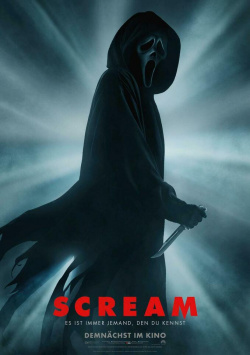 The Ghostface killer is back and spreads fear and terror in Woodsboro once again. Twenty-five years after the first bloodshed, another bloody attack occurs in the small town, prompting Sam Carpenter (Melissa Barrera) to return to her old home after many years to stand by her sister Tara (Jenna Ortega). But when it becomes clear that the killer is targeting the sisters and their friends, it becomes clear that they need help - help from people who have already survived multiple attacks from various Ghostface killers....

"Scream" is the now fifth part of the successful horror series, with which Wes Craven has breathed new life into the slasher genre in 1996. The last part so far, which came to our cinemas 11 years ago, was also Craven's farewell performance, because the director died in 2015 at the age of 76. Now Matt Bettinelli-Olpin and Tyler Gillett, who had delivered an extremely entertaining genre effort with "Ready or Not", have taken on Craven's legacy. Their film, which is not called "Scream 5" but simply "Scream" like the original, is - we learn in the film - a so-called "Requel". This is a mixture of remake and sequel, so it's more or less a reboot, but one that offers enough fanservice to satisfy even fans of the first hour. As is so often the case, this is achieved by having a new cast as well as so-called legacy stars - popular characters from the old films - reappear. In this case, that's Courteney Cox, David Arquette and Neve Campbell.

But also in addition to the reunions with popular characters such as Sidney Prescott, Gale Weathers and Dewey, Part 5 has a high recognition value, he plays not only in the usual "Scream" manner on the meta-level with the rules of horror films, sequels and just now the Requels, but also quotes the original again and again. Because - this is also a rule of Requels -: It always goes back to the original! This is sometimes very funny and clever, but it also wears out quickly in the long run. No question: As a fan of the first films and generally of the slasher genre, I was very well entertained, especially at the beginning. Especially since the directors truly don't let it get squeamish.

My problem with the film was rather that it relies too much on the meta-gags instead of telling a truly original story. Admittedly: I didn't really see the resolution coming that way, but it didn't really convince me. The big surprise effect that made part 1 so special was simply missing here. In addition, the new characters remain for me very superficial and for the most part not really sympathetic (which is admittedly a purely subjective feeling). What is always clear, though, is that Matt Bettinelli-Olpin and Tyler Gillett love and respect the genre. Unlike other requels, which are definitely made fun of directly or indirectly here, their film does not destroy what Wes Craven created with the four predecessors.

"Scream" offers fans of the series many good moments on balance - even if the stars of the earlier films only play much too small supporting roles. The kills are very bloody and the mix of humor and suspense works very well in many moments. But there is a lack of new sympathetic characters, which one would like to follow through further sequels, and dramaturgically the big surprises, for which the franchise is actually known. For me a decent, but not really outstanding fifth part, for which there is still a satisfied "Sehenswert". Still, if Ghostface ever asks me for my favorite horror movie, the answer will definitely not be "Scream 5"