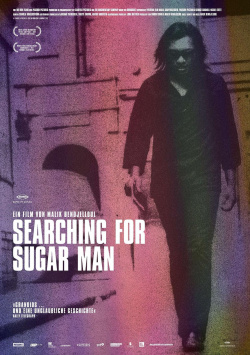 Arguably the most beautiful and unbelievable story of the 2012 cinema year was not dreamed up by a genius screenwriter. No, what Swedish filmmaker Malik Bendjelloul tells in his justifiably multi-award-winning documentary Searching for Sugar Man is actually a true story, even if it may sound like a fantastic fairy tale in places. The film traces the brief career of Detroit musician Sixto Rodriguez. In the 1970s, the Mexican-born singer-songwriter released two albums that industry insiders hailed as small Bob Dylan-style masterpieces, but they simply failed to find an audience. After the two albums failed to find buyers and Rodriguez's live performances met with little enthusiasm, the musician ended his career.

But what Rodriguez didn't know was that in South Africa he became a megastar by accident. His music became the soundtrack of the anti-apartheid movement and his records sold more than those of Elvis Presley and other popular artists. South African fans were all the more shocked by the news that the singer had killed himself. Years later, two fans made their way to the United States to finally give Rodriguez the memorial he deserved. In the process, they not only learned that no one in America seemed to know about the musician's enormous success in South Africa. They also stumbled upon an incredible truth that took their documentary in a whole new direction and gave music history a fascinating new chapter.

Searching for Sugar Man is a great film. The story has some very effective goosebump moments, especially in the second half, but at the same time it shows just how ruthless the music business can be. There are two particularly interesting questions that Bendjelloul explores: why was Rodriguez simply not successful in the US and where did the royalties from album sales go in South Africa. The first question is dealt with in a rather factual and analytical manner, and is particularly interesting in terms of how marketing has changed over the last forty years. The internet in particular would certainly have made it easier for Rodriguez to promote his music to a wider audience today. Back then, however, this simply wasn't possible due in part to his name, which probably suggested a very different genre of music to many potential buyers, even though many of his songs are really quite great.

The discussion of the second question, on the other hand, is fascinating on several levels and makes for one of the most incredible interviews in the entire film. When Clarence Avant, former owner of Sussex Records, talks about Rodriguez, the whole thing starts out very emotional. However, as soon as the conversation seems to turn to royalties, the tone changes drastically. This short scene makes it clear how little talent actually matters in the music business. Because business is business and when it comes to money, it's no longer about what would be fair and just in a moral sense.

For me personally, Searching for Sugar Man is not only the best documentary of the year, but also one of the best films of 2012 ever. The reason for this lies in its many surprising and wonderful moments, in the fact that the film entertains the viewer well, is factually interesting but also leaves you feeling extremely positive emotionally and finally in the fact that through this documentary Rodriguez and his music is finally getting the attention he deserves outside of South Africa. In the US and England, this has already worked. There, the singer-songwriter's albums finally made it into the charts. Therefore: Absolutely worth seeing!!

Cinema trailer for the movie "Searching for Sugar Man (Schweden/Großbritannien 2012)"
Loading the player ...