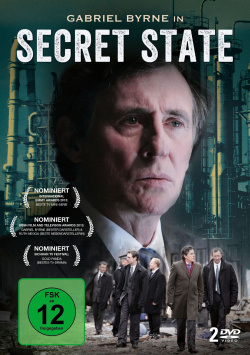 Contents: It is an unimaginable catastrophe: when an explosion occurs in a petroleum factory, large parts of a neighborhood are destroyed and 19 people are killed. The British Prime Minister promises quick clarification and therefore travels to the USA to PetroFax, the company that operated the factory. But during the return flight, the prime minister's plane mysteriously crashes and his deputy Tom Dawkins (Gabriel Byrne) must now investigate the accident, help the people of the affected neighborhood and avert further damage from his party. After all, there will be elections soon and of course the ruling party is supposed to win again despite the accident. Initially reluctant to face up to his new responsibilities, Dawkings soon grows beyond himself and becomes a pioneer of justice and sovereign governance. But the more he gets on the track of the machinations that led to the accident, the more he has to realize how far the web of intrigues and corruption is branched and that his opponent doesn't shy away from murder to conceal the truth...

"Secret State" is already the second film adaptation of Chris Mullin's 1982 book "A very British Coup". While the novel and the first TV adaptation of 1988 focused on the Cold War, director Ed Fraiman and screenwriter Robert Jones have given the whole thing a whole new direction by shifting the plot to the present and globalising capitalism being decisive for political and economic machinations. Especially when such topics as the interception of citizens by the secret services are addressed, it becomes clear how much this updated adaptation hits the nerve of time.

The four-part mini-series is extremely exciting, especially in the first half, and convinces with a dense staging, an atmospheric visual language and an outstanding cast. Gabriel Byrne initially depicted the Vice Premier with almost stoic restraint, but then filled him more and more with passion and commitment. Byrne is supported by an outstanding ensemble, from which especially Rupert Graves, Gina McKee ("Notting Hill") and Ruth Negga, nominated as best supporting actress for an Irish Film and Television Award, stand out.

Then it's also the good actors who help the story through some bumpy passages. Because the plot takes on some not quite logical and credible proportions here and there. The construct, which is still very carefully and quite cleverly constructed at the beginning, becomes somewhat wobbly towards the end and threatens not to be able to withstand a more precise questioning. But fortunately the whole thing becomes exciting enough again at the finale to let such dramaturgical weaknesses fade away. At the last minutes, however, the ghosts of the audience are guaranteed to divorce. Because without revealing too much, it can be said that Robert Jones has written an end that, despite a certain unambiguity, still offers a lot of scope for different interpretations. Some viewers might feel left hanging in the air. But at a closer look this not quite clear ending is the perfect way to end a story with such a theme.

Although not completely free of weaknesses and smaller lengths, "Secret State" is a very well done political thriller that offers the audience three hours of exciting entertainment. Anyone who appreciates British crime food with current topics such as terrorism, globalisation, conspiracies and wiretapping scandals can certainly access it here. Worth seeing!

Picture + sound: The audiovisual implementation of the Mini series on this DVD is on a good TV level. The image is clean, the colour is atmospheric and the sharpness is pleasantly high in most moments. This doesn't necessarily have a cinema level, but really disturbing weaknesses aren't noticeable either. The tone, as usual in this genre, is primarily determined by the dialogues. There are some properly implemented sound effects and ambient noises, but the surround channels are not overused. All in all this is enough for a more than satisfied one: Good!

Extras: For each episode there is a short look behind the scenes, which is very short with 2 to 3 minutes each. Nevertheless, these short features are well worth seeing.

Fazit: "Secret State" is an exciting polit-mini-series, which doesn't always strictly follow the laws of logic, but offers good and captivating entertainment for about three hours. The secret machinations in politics and industry paired with the very current topic of total surveillance by secret services makes this second adaptation of the novel "A Very British Coup" by Chris Mullin an extremely worth seeing piece of contemporary TV entertainment. Anyone who appreciates European political thrillers and can overlook smaller dramaturgical hiccups should definitely access this double DVD.