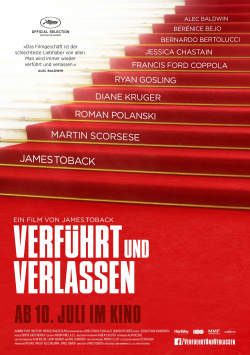 In addition to the film presentations and the accompanying parade of stars and starlets on the red carpet, major film festivals are always a marketplace for new projects. This is where scripts are pitched, financiers are sought and multi-million dollar deals are struck. One of the most important of these marketplaces is the legendary Cannes Film Festival. In 2012, filmmaker James Toback and actor Alec Baldwin also want to find financiers at the Croisette for their joint project The Last Tango in Tikrit, a political erotic adventure in the Middle East inspired by Bernardo Bertolucci's scandalous film The Last Tango of Paris. Along the way, they meet with producers, millionaire investors and potential actors as well as directing greats like Martin Scorsese, Roman Polanski and Francis Ford Coppola, from whom they hope to get important advice.

All these conversations, the door-knocking with millionaires and studio bosses and the goings-on behind the glittering facade of Cannes have been captured by the two in the documentary Seduced and Abandoned. The result is a film that is both a declaration of love for cinema and filmmaking and a sobering look at the mechanisms of the film industry. When, for example, a producer admits that he hasn't read scripts for a long time and finances a film solely on the basis of the market value of the actors he has hired, the Hollywood myth is clearly disenchanted. Also, what Ryan Gosling has to say about promotional tours for his films or the very realistic views expressed by B&eacute;r&eacute;nice Bejo (The Artist) about the transience of fame comes across as rather disillusioning.

But on the other side is the great passion that can be heard from the actors interviewed, but especially from the directorial greats, and which is underscored in split-screen proceedings by clips from numerous classic films. And it quickly becomes clear that the many wonderful aspects of cinema cannot exist without the mercilessly commercial industry behind the curtain, and that this industry is responsible not only for a lot of fast-moving rubbish, but also for many timeless works of art.

Seduced and Abandoned is a very entertaining and enlightening documentary for all cineastes and those viewers who are interested in filmmaking or the film industry. The film also has some quite wonderful moments to offer, with the interview sequences in particular standing out with a refreshingly honest Ryan Gosling and a very passionate Martin Scorsese. If you can get past the somewhat plodding beginning, you get to see a very exclusive glimpse behind the red carpets of Cannes, merciless film producers as well as legendary filmmakers and actors spoiled for success away from the usual promo drivel. And it really is amazingly fun! Absolutely worth seeing!

Cinema trailer for the movie "Seduced and Abandoned (USA 2013)"
Loading the player ...