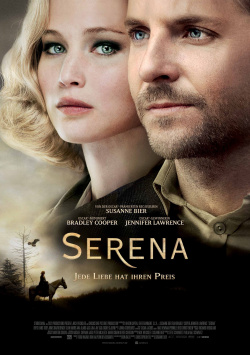 North Carolina in 1929: Ambitious timber entrepreneur George Pemberton (Bradley Cooper) seems spoiled by success. He owns vast tracts of forest in the Smoky Mountains, and he also has lucrative land in Brazil, where he would like to spend his future. But his happiness still lacks the right woman at his side. He seems to have found her in the self-confident Serena (Jennifer Lawrence), heiress to a large logging dynasty. Against all odds, Serena manages to hold her own in the male-dominated world of the rugged Smoky Mountain woods. Even the taciturn foreman Galloway (Rhys Ifans) soon has great respect for the strong woman, who also seems to bear with dignity the fact that her husband has impregnated another woman. But when environmentalists want to turn the area into a national park and Sheriff McDowell (Toby Jones) begins to take an increased interest in George's business, the air becomes increasingly thin for the young couple. When a serious blow of fate destroys the family's happiness, the romance that began so passionately takes a dramatic turn.

Serena brings together the new Hollywood dream couple Bradley Cooper and Jennifer Lawrence for the third time. Following Silver Linings and American Hustle, the pair have now been in front of the camera in the Czech Republic for Danish Oscar-winner Susanne Bier (In a Better World). Based on the novel of the same name by Ron Rash, Bier's second Hollywood production tells a dramatic love story about big dreams, jealousy and the dark side of the human soul. It's an often very quiet film with a depressing underlying mood.

Although the camerawork is truly top-notch and ensures that Serena is wonderful to look at, and though all the actors, especially the barely recognizable Rhys Ifans (Notting Hill) and Oscar winner Jennifer Lawrence, deliver convincing to very good performances, the spark doesn't quite want to jump out at the audience. Except for a few small highlights, the production remains surprisingly emotionless, which has the consequence that you as a viewer eventually just lose interest in the story and its brittle drawn characters.

So in the end a somewhat ambivalent overall impression arises. On the one hand, the story is interesting at its core, the imagery is intriguing, and the actors are absolutely convincing in their own right. On the other hand, the production lacks the honest emotionality that has characterized Bier's previous works. Even her rather routine romantic comedy Love is all you need was much more convincing in this respect than the more ambitious and technically superior follow-up Serena. Wrapped up in the very special atmosphere that the film exudes, this weakness can be concealed quite well especially in the first half of the film. But towards the final act it reveals itself more and more clearly and the viewer feels only a disappointing emptiness at the end.

Who can overlook the fact that the story can not even come close to unfolding its emotional power and for whom a great visual language is enough to be carried through almost two hours, this arthouse drama can be thoroughly recommended. But if you're expecting the same chemistry between Jennifer Lawrence and Bradley Cooper as in their previous collaboration and a similarly high entertainment value, you'll be bitterly disappointed. In the end, that's only good enough for a: Worth seeing with reservations!

Cinema trailer for the movie "Serena (USA/Frankreich 2014)"
Loading the player ...