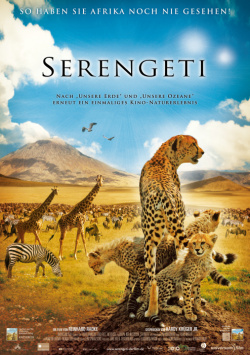 And another nature documentary comes to our cinemas: only a few weeks after the impressive "Russia - In the Realm of Tigers, Bears and Volcanoes" it now goes to the "Serengeti". Here the viewer witnesses a particularly fascinating spectacle that repeats itself year after year. Due to the changing rainy and dry seasons, large herds of antelopes, buffalos, gazelles, wildebeests and zebras move across the savannah, always in search of water and food. The journey is full of hardships and many animals lose their lives along the way. Whether at the hands of natural finesses like lions or crocodiles, or at the hands of relentless nature, steadily the numbers of the migrating herd animals dwindle - only to rise again at the end through the natural cycle of life.

Naturally, the title "Serengeti" immediately brings to mind the nature film classic "Serengeti Must Not Die" by Bernhard Grizmek. However, the documentary by Reinhard Radke, who holds a doctorate in zoology and is a passionate wildlife filmmaker, does not leave a similarly lasting impression. On the one hand, this may be due to the overabundance of documentaries of a similar nature that have been shown in cinemas in recent years. As sad and perhaps cynical as this may sound, wildebeests or gazelles do not have the screen appeal of baby polar bears or penguins. Therefore, the beautiful pictures are not really enough to lift the film out of the mass of animal documentaries.

On the other hand, this may be due to the rather dry production. The film, aided in part by the accompanying text spoken by Hardy Krüger Jr, comes across as very matter-of-fact and rather scientific, which, while not detracting from the documentary's importance, does lower its entertainment value. This is not to say, however, that the images captured by Radke's team over two years of work are not absolutely stunning and in some cases beautiful. Or that the film would not prove once more that there are so many reasons to save this planet and its inhabitants with all means at our disposal. But as a film, the documentary lacks that special something that would encourage families in particular to go to the movies.

The dilemma here is that the images themselves can only really develop their power on the big screen. However, the film itself would be better off on television, where it could certainly find a wider audience. Passionate lovers of animal and nature documentaries will certainly find their way to the cinemas, because even if this work may have its weak points from a dramaturgical point of view, the images and message are reason enough to recommend "Serengeti" at least to its target audience.

Cinema trailer for the movie "Serengeti (Deutschland 2010)"
Loading the player ...