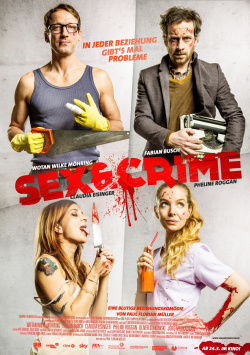 After his marriage goes on the rocks, Theo (Fabian Busch), author of successful Sex & Crime novels, lets his best friend Valentin (Wotan Wilke Möhring) talk him into a one-night stand with attractive waitress Mörli (Claudia Eisinger). But the heated tryst gets a little out of hand and soon there's a dead body, an overly nosy neighbor and a completely distraught Theo. But that's just the tip of the iceberg, because neither the one-night stand, nor the end of Theo's marriage, nor even his friendship with Valentin are what they seem.

With his feature-length debut Sex and Crime, director and screenwriter Paul Florian Müller has tried to blow a breath of fresh air through young German cinema for once. His bloody relationship comedy quickly comes across as refreshingly different. Due to the fact that the time and narrative levels are constantly changed, which always reveals new twists, the fun factor of this black comedy quickly rises to the top. Certainly, one could identify some international role models here, on which the production is quite obviously oriented. But for a German film, the whole thing is a pleasant change.

The actors give the impression with their play, as if they had a lot of fun working on this project. Especially Fabian Busch and Claudia Eisinger can leave a lasting impression here. And also Wotan Wilke Möhring convinces with a good portion of self-irony. It is simply fun to watch the small but fine ensemble at work. And that their play is then also integrated into a wonderfully weird story, strengthens this impression even more.

More should not be said at this point, so as not to spoil the fun for potential viewers of the many surprises that are in the course of the increasingly abstruse story. One thing has to be said, though: The last act unfortunately can't keep what the very good beginning promises. The last minutes seem to be a little bit too hard and too chaotic to fit harmoniously into the up to now quite clever build-up of the plot. It almost seems as if Müller just ran out of good ideas towards the end. That's a real pity considering the many funny ideas. On the other hand, the film works well enough over long stretches to console over the somewhat disappointing finale.

And so in the end it remains to say that it is always nice and refreshing when German directors dare to wander off the beaten track. Even if the result isn't perfect, it's entertaining, original and amusing enough to deserve a clear worth seeing!

Cinema trailer for the movie "Sex and Crime (Deutschland 2016)"
Loading the player ...