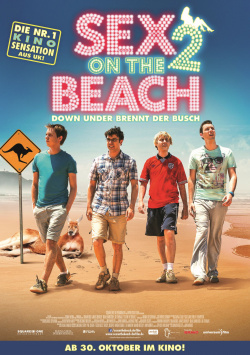 Sex on the Beach 2

The Inbetweeners are back! After the former series heroes Will (Simon Bird), Neil (Blake Harrison), Jay (James Buckles) and Simon (Joe Thomas) in 2012 with their first feature film Sex on the Beach just in their native United Kingdom a real record result at the box office, the escapades of the four friends now go into a second round. While the first film was already much cruder and raunchier than the series, Sex on the Beach 2 takes it up a notch. The story plays a rather subordinate role: A few months have passed since the events of the first film. Will still hasn't quite settled into his second semester at Bristol University, Simon is only partially comfortable in his relationship, and Neil - well, he's just Neil. Only Jay's life seems to be a real paradise after breaking up with his girlfriend. He's gone to live with his uncle in Australia, supposedly lives in a real mansion there and is constantly having sex with the hottest women. For the others, these are enough reasons to pay their buddy a visit in faraway Australia.

Those who know the series or the first movie will already suspect that Jay has exaggerated a bit (a lot) in his descriptions. True, he really does work in a club, as he grandly told us. But in reality he doesn't stand behind the controls as a DJ, but as a toilet man who cleans up the guests' messes. And it just doesn't work out with the women either. But now that the rest of the Pussy Patrol is down under, things are about to change. Together the quartet sets off to the backpacker mecca Byron Bay to experience many erotic adventures. But as you would expect, they don't miss a beat in their efforts, no matter how small.

Sex on the Beach 2 has some very amusing moments, there's no question about that. Especially cut-up Simon and the fat diver Will provide some really good laughs again. But unfortunately, series creators and directors Damon Beesley and Iain Morris try to top the outrage factor of the first film, relying too much on fecal humor. The protagonists getting peed on here, or Neil defecating on a water slide, which of course then has to end up in Will's face, is just too much of a good thing. The whole thing wouldn't be so bad if such gags were only implied. But to show this in full obnoxiousness isn't really funny, and doesn't really show ingenuity.

This is a shame in that the series certainly had its charm, which can be felt in places in the two feature films. Sure, even in the three seasons of the series, there were quite a few jokes and some rather unprofessional derailments. But all in all the first episodes worked really well, because not everything was shown in detail and more emphasis was put on the little quirks of the main characters. That the makers apparently had the feeling that they have to offer their target audience in the cinema version as many crude messes as possible and have lost sight of what actually made the series, not only lowers the level of the whole, but also the entertainment value.

Who could laugh heartily about Sex on the Beach and had the feeling that the whole thing was still a little too well-behaved, which will probably be able to laugh heartily several times in this Australia trip. After all, the makers pull their uninhibitedly raunchy style consistently until the end. If you like that, you'll really get your money's worth. If, on the other hand, you liked the series, but already had the feeling that the first film kept overshooting the mark, this second holiday with the Inbetweeners will be rather unpleasant for you. Therefore, only for those comedy fans who don't think there are things you just don't need to see, and for zany lovers for whom feces is an always-working comedic device, well worth watching!

Cinema trailer for the movie "Sex on the Beach 2 (Großbritannien 2014)"
Loading the player ...