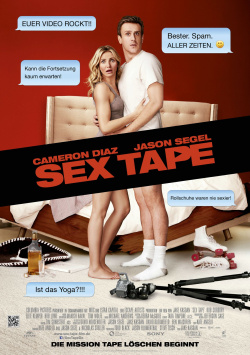 In the past, not a second actually went by when Jay (Jason Segel) and Annie (Cameron Diaz) could keep their hands off each other. But ever since they got married and became parents to two kids, the passion of yore has given way to the tiring strains of everyday family life. When they finally get a night all to themselves, Jay and Annie want to take the opportunity to rekindle the extinguished fire of their relationship. A sex video, in which they try out all the positions from the legendary sex education book The Joy of Sex, is supposed to help. Too bad Jay doesn't delete the three-hour film the next day as promised, but saves it on his iPad. This turns out to be a fatal mistake, as the video is automatically synced to each of his former devices, which Jay has given away to friends, relatives and even the postman. It soon becomes clear that it's only a matter of time before everyone who knows Jay and Annie can watch them having sex. And that must be stopped at all costs. And so the two go on a hunt for the iPads they've given away, hoping to get them together before the video finds its way onto the internet.

With Cameron Diaz, Jason Segel and director Jake Kasdan, the dream team from the hit comedy Bad Teacher has reunited. And also for the screenplay they have relied on a proven duo with Segel and Nichols Stoller, who together already have some comedy successes (The Muppets, Almost Married, Never Sex With Ex Again) to show. And the idea around a sex tape whose distribution must be stopped at all costs also sounds extremely promising. So the conditions for Sex Tape to have become an extremely funny, irreverent and - according to the title - sexy comedy are actually very good.

The truth, however, is unfortunately different. Sure, there are some very amusing scenes and really good laughs. For example, a longer sequence that takes place in the house of Annie's potential employer (Rob Lowe) is a real gag firework that overshoots the mark a bit in some moments, but at the same time also shows how much comic potential actually lies in the story. In many other scenes, however, the script relies too much on the humorous effect of crude fecal language and thus loses sight of the actual story. This results in moments where the viewer gets bored, while the actors themselves don't seem to be that enthusiastic about what they're saying. The charm and wit that sparkled between Segel and Diaz in Bad Teacher is very rarely evident here. And that's a damn shame.

Surely, Sex Tape doesn't harbor any pretensions of wanting to be particularly quality entertainment. The film never really tries to be anything more than a somewhat campy comedy. Still, a little more cleverness in the gags would have been beneficial. Although there are some very funny moments, the humor is rather flat and the many sex jokes are tiring in the long run. But on the other hand it's also undeniable that viewers who just want to enjoy shallow entertainment and are fans of the main actors will definitely get their money's worth out of this comedy. And who always wanted to know what sites there are on the Internet, on which private sex films are uploaded, which is offered here by a prominent guest star also a detailed listing.

So Sex Tape is in places a little disappointing and absolutely unsuitable for friends of the fine-spiritual humor. But otherwise there is with small deductions still just a: Worth seeing!