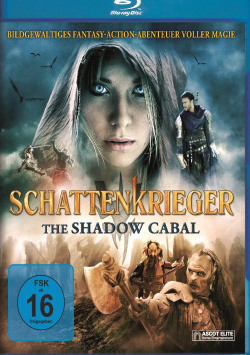 Content: The renewed war among the gods has caused death and destruction in the human kingdom. Out of desperation, the survivors founded the Order, an alliance with the elves and the dwarves. With the help of the order the war could be ended and the orcs and the dark elves could be driven into the wasteland. But peace does not last. The prophetess of Ari-Alia increasingly has visions of a growing darkness called "the shadow". In the border countries more and more warriors of the shadow are gathering, who endanger peace in the human kingdom. Agents are sent to find out where the Shadow Warriors come from and what their intentions are. One of these agents is the warrior Keltus (Richard McWilliams), who is supposed to prevent the Shadows from coming into possession of an artifact that can help resurrect evil once and for all. On his quest for the artifact, Keltus must join forces with the fiery Nemyt (Danielle Chuchran), a bounty hunter of the elves, and the renegade Orc Kullimon (Paul D. Hunt), who does not want to submit to the shadow. This unusual alliance must fight an overpowering enemy - a battle that seems lost when the Shadow Warriors come into possession of the artifact...

"Shadow Warrior - The Shadow Cabal," director John Lyde says, is a movie made by fans for fans. After all, he and his team from Arrowstorm Entertainment are enthusiastic gameplay fans of fantastic worlds, which Lyde wanted to create himself with the help of crowdfunding. When at the beginning a woman's voice tells of a devastating war, of elves, dwarves and orcs and of the strengthening of evil, while the camera wanders across the map of a world full of magic and mythical creatures, it quickly becomes clear where Lyde got his ideas from. An orc riding on a dragon or a prisoner whose hairstyle, posture and demeanor of course reminds me of Gollum by pure chance, all this is very obviously borrowed from the "Lord of the Rings" movies - even though Lyde only had the budget Peter Jackson needed in one week for the catering on the set of his movies.

A little more restraint when stealing the ideas would have been advantageous for "Schattenkrieger - The Shadow Cabal", because the comparison to the successful Tolkien film adaptations is almost obvious - and of course the independent production cannot stand up to this comparison at any moment. That's unfortunate in that John Lyde created a quite entertaining and technically solid fantasy adventure with the means at his disposal. Well, the effects aren't always convincing, the masks sometimes look a bit trashy, the dialogues can't be described as sophisticated or intelligent at best, and the actors don't deliver particularly high acting skills. Nevertheless, it should be noted that everyone involved was there with a heart and a certain passion for the genre, giving it a certain charm that comforts over some of the obvious weaknesses.

"Shadow Warrior - The Shadow Cabal" should therefore not be judged by its clearly cited role models if one wants to have fun with the unequal trio's attempt to stop evil. If you don't expect much more than a solid B-movie with some nice effects and a good entertainment factor, you'll be well served in this fantasy adventure!

Picture + Sound: The picture pleases you with a partly very good detail sharpness, which comes into its own especially in the outdoor shots. The colours sometimes have a deliberately artificial effect, but always match the mood of the respective scene. Contrasts and black levels are also at a good level, which further enhances the positive overall impression of the image. The DTS-HD Master Audio 5.1 Mix sounds a bit powerless in a few moments, as the very frontally mixed dialogues overlap the action. But every now and then a few well done surround moments also provide some dynamic, which could have been a bit better. But all in all it's still enough for a "good"!

Extras: As a bonus there's a look at the combat training (about 8 min.), which obviously took place in the director's living room, some outtakes (about 4 min.), as well as an interview with Chris Wells (about 3 min.), who is responsible for the visual effects. A kind of amusing trailer in form of an orc room (approx. 1:20 min.), as well as the official trailer and further program tips of the offerer round the additional offer off.

Fazit: "Schattenkrieger - The Shadow Cabal" is a not exactly subtly stolen fantasy adventure, which cannot hide its small budget always successfully. A lack of originality and rather simple make-up and computer effects are compensated by the obvious love of the genre on the part of the makers. Even though this work, which is partly financed by Crowdfundig, offers neither dramaturgical nor acting quality, this "Lord of the Rings" clone is pleasantly entertaining. If you don't expect more than a B-movie created by obvious fans of the fantasy genre with such a high trash factor as recognition value, you can be entertained during this adventure.