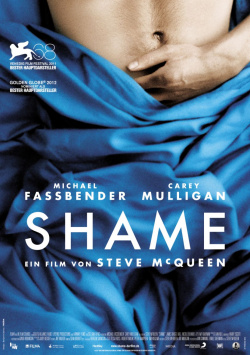 Brandon (Michael Fassbender) seemingly enjoys his life to the fullest. He's in his mid-thirties, professionally successful, attractive and unattached. He tries to nip any form of routine and boredom in his daily life in the bud with quick, superficial affairs. Emotions only get in his way. Brandon is used to always being in control of his emotions and his fleeting, purely sexual relationships. But when his eccentric sister Sissy (Carey Mulligan), burdened with severe problems, shows up at his place and takes up residence in his apartment, Brandon's clearly structured daily rhythm threatens to collapse - with fatal consequences...

Shame is the second collaboration between Michael Fassbender and acclaimed director Steve McQueen, following Hunger. That there is a close relationship of trust between the actor and the filmmaker is clear from the very first minutes of the film. Because what Fassbender reveals here with seeming naturalness is something you don't see every day in the cinema. Well, maybe you see a bit more than you want to see, but there is more behind the quite provocative opening scenes than just the idea to shock with naked facts. Through the superbly composed montage of moments where Brandon makes intense eye contact with an unknown beauty on the subway, which at least at the beginning of the montage still has a romantic undertone, with scenes of him roaming naked through his sterile apartment, ignoring phone calls and him clearly focused only on himself and his sex drive, says more about Brandon's character without many words than any lengthy introduction could have managed.

As the film progresses, it becomes more and more clear that Brandon is a complete sex addict and is just trying to cover up his inadequacies in terms of forming emotional attachments through sex. The appearance of Sissy and her need for attention and something like loving attention, of course, throws Brandon completely off track, making him aggressive, vulnerable and even affecting his libido.

Shame is a movie about two completely messed up people. With sex scenes staged as unerotically as possible and a deliberate superficiality, the audience is thrown into the somewhat unwieldy story, only to be overtaken by a wave of emotion at the end. As intense as the opening montage is and as strong as the acting of the two leads is, the finale remains a bit of a disappointment. Because where McQueen showed a lot of restraint in the first half of the film, he applies a little too thick at the end. Moreover, the characters remain largely unapproachable for the viewer - which is admittedly due to their nature and may therefore be intentional. But this aloofness makes the emotional finale seem all the more over the top.

However, even if Shame can't sustain its quality to the end, the undercooked drama is unusual and fascinating arthouse cinema and a stellar acting performance from Michael Fassbender and Carey Mulligan. The atmospheric shots of New York and the hypnotic score do their part to ensure that, despite minor flaws, the film can definitely be recommended to lovers of provocative program cinema fare.

Cinema trailer for the movie "Shame (Großbritannien 2011)"
Loading the player ...