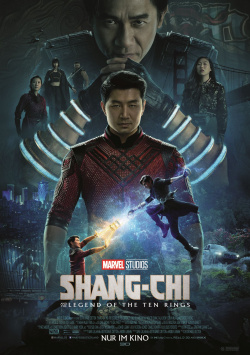 Shang-Chi and the Legend of the Ten Rings

Shaun (Simu Liu) leads a simple life as a parking attendant in San Francisco. With his best friend Katy (Awkwafina), he takes joyrides in cars that the two of them are supposed to be parking or roams around karaoke bars with her. He's not big on responsibility - until one day Shaun is attacked by mysterious men on a bus. Katy is astonished when Shaun puts the attackers to flight with precisely executed martial arts. What she doesn't know is that her buddy's name is actually Shang-Chi. As a child, he was trained by his father in various fighting styles. But he didn't want to live the life his father had intended for him. So he left his home in Macau to start over in America. But now Shang-Chi must face his past and the mysterious "Ten Rings" organization - a task Shang-Chi doesn't seem to be up to just yet....

I have to admit that the trailers for the latest Marvel adventure "Shang-Chi and the Legend of the Ten Rings" left me rather cold. While the first clips promised an action-packed adventure, they didn't leave a lasting impression, at least on me. So I'm all the more pleased to say that the film turned out really well. Yes, it has some problems, especially when there is too much CGI in the action sequences. Also, the main character Shang-Chi is now (so far) not the most interesting character from the Marvel universe, which also leaves Simu Liu's performance a bit pale. But on other levels, the flick delivers completely.

The introduction of the antagonist, for instance, is very well done, as it prevents him from degenerating into a one-dimensional villain. Even if his actions can be described as "evil", his motivation is quite comprehensible, especially due to the extended opening sequence. Also successful is the much lighter and humorous tone of the sequence in which Shang-Chi and Katy are introduced, in comparison. The whole thing culminates in a great fight sequence on a bus, which only suffers from a little too much CGI use. Really spectacular a little later is another fight sequence that takes place on a skyscraper scaffolding. Just great.

Also, the unexpected reunion with an old Marvel acquaintance (nice to see him or her - it won't be revealed here - again. I wouldn't have expected that!) and the design of the magical world, from which Shang-Chis deceased mother comes, make sure that the entertainment value is skyrocketing. Even if there are dramaturgically small points of criticism here and there - the whole thing just seems too conventional in the genre of comic adaptations - and even if some of the characters could be fleshed out even better, the cinema debut of the Marvel hero Shang-Chi, who first appeared in the early 1970s, is on balance more than successful. "Shang-Chi and the Legend of the Ten Rings" is quite great popcorn entertainment cinema with great action, some fascinatingly beautiful imagery and characters that are a pleasure to watch. So the 2+ hour running time - a mid-credit and a post-credit scene included - flies by. Clearly, absolutely worth craving!

Cinema trailer for the movie "Shang-Chi and the Legend of the Ten Rings (USA 2021)"
Loading the player ...