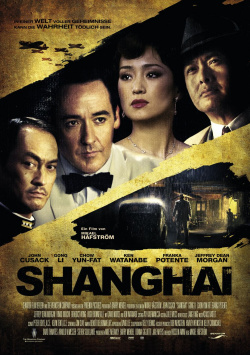 Director Mikael Håfström and lead actor John Cusack continue the successful collaboration they started with the Stephen King adaptation Room 1408 with the thriller Shanghai. Good actors and a great set create the best conditions for this second collaboration of the talented director and the great actor to convince again. But the end result, unfortunately, has too many weaknesses to actually allow this conclusion.

American secret agent Paul Soames (Cusack) arrives in Shanghai in 1941, just days before the attack on Pearl Harbor, to solve the murder of his best friend (Jeffrey Dean Morgan). His investigation leads him to gangster boss Anthony Lan-Ting (Chow Yun-Fat) and his beautiful wife Anna (Gong Li). With the help of German diplomat's wife Leni Müller (Franka Potente), Paul actually manages to gain Anthony's trust and thus be accepted into his trusted circle. This attracts the attention of the Japanese secret officer Tanaka (Ken Watanabe), who henceforth has the American shadowed. When Paul finds out that Anna is leading a secret double life and he embarks on an affair with the beguiling woman, he not only puts his life in danger.

Shanghai gathers some great actors in front of the camera. In addition to John Cusack, who can still deliver strong performances even in weak films, Chow Yun-Fat, Ken Watanabe, Gong Li, Franka Potente, Oscar nominee Rinko Kikuchi (Babel) and even David Morse (The Green Mile) act in their usual commanding manner. Embedded in an atmospheric set and an engaging imagery, the film tells a thrilling story about deception, love and betrayal. All of this sounds like a spy thriller absolutely worth watching. But despite all the good ingredients, Shanghai just doesn't want to work right.

The reason may be the direction of Mikael Håfström, who tells the story with a heavy-handedness that is rather unusual for him. He gets too bogged down in rather unnecessary details instead of moving the plot forward. So he does achieve some very strong and also beautiful moments, where especially the scenes between Cusack and Chow Yun-Fat stand out. However, the whole thing comes at the expense of the tension, which just won't happen. When the story does pick up steam towards the superbly staged finale, it becomes clear what potential has been squandered here.

Håfström deserves credit for his attempt to create an old-fashioned spy thriller in the style of Casablanca, as it doesn't necessarily follow the viewing habits of a wide audience. With a more gripping and atmospherically dense production, he could have achieved a great success. But this way Shanghai is nothing more than boredom on a high level, with great show values and a lot of wasted potential. Too bad