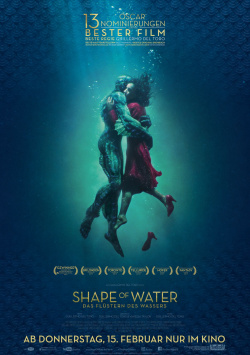 Shape of Water - The Whisper of Water

Silent dreamer Elisa (Sally Hawkins) works as a cleaner in a secret high security lab during the Cold War. The work is routine, and Elisa and her colleague Zelda (Octavia Spencer) are always conscientious about it. But one day she discovers a mysterious fish creature (Doug Jones), which has been classified as a dangerous experiment. A very special bond immediately forms between the young woman and the creature, and Elisa builds on it day by day with clandestine visits. But when she learns that the ruthless Strickland (Michael Shannon) has been ordered to kill the creature, Elisa makes a plan: to save her new friend and give him his freedom again.

It's no secret that Guillermo del Toro has a soft spot for monster movies. He has also proven that he can tell fairy tales for adults very well. Now, with Shape of Water - The Whisper of Water, he delivers a wonderful blend of both. Probably the most unusual love story of recent years, it is not only thrilling and thrillingly staged, but is also a playful, heartwarming homage to classic cinema. This is not only evident in the fact that Elisa and her neighbor Giles (Richard Jenkins) live above an old movie theater. Del Toro also repeatedly cites other works, most notably, of course, Jack Arnold's classic monster movie The Terror of the Amazon, whose gill-man the creature Elisa loses her heart to is reminiscent of, and not just in appearance.

Doug Jones, who has been in almost every del Toro film since Hellboy, brings the mysterious creature to life perfectly and, along with Sally Hawkins, manages to make the feelings developing between the two believable and understandable to the audience as well. If this wouldn't have been successful, the whole movie wouldn't have worked. Therefore, especially here a successful interplay between direction, actors, but also camera and music is incredibly important. And since everything really interlocks in a great way, very enchanting emotional cinema emerges behind a fantasy facade, which can be understood as a plea for tolerance in an original and touching way.

At its core, Shape of Water is about outsiders yearning for love and affection. There's Elisa, who lives a life of silence and isolation, which is precisely why she has a very close bond with her neighbor Giles, who has to hide his homosexuality in early 1960s America and therefore lives lonely in his little dream world. And then, of course, there is the creature who is snatched from its proper home and is only tormented and humiliated by the people who captured it. They all come together in the wonderful story that del Toro tells with a lot of emotion, poetry, but also with sly humor and some suspense.

Out of the great ensemble of actors, in addition to Sally Hawkins, the delightfully nasty Michael Shannon and Richard Jenkins definitely need to be singled out. Jenkins manages to express the longings and loneliness of his character, especially with his looks, which is why Giles quickly grows on you. But also the once again great Octavia Spencer and Michael Stuhlbarg make the visually magical film also acting a treat.

Admittedly, Shape of Water is a bit special and is unlikely to appeal to mass tastes. But who can get involved in unusual and imaginative cinema fairy tales and who already liked del Toros Pan`s Labyrinth, should not miss this work in any case. Absolutely worth seeing

Cinema trailer for the movie "Shape of Water - The Whisper of Water (USA 2017)"
Loading the player ...