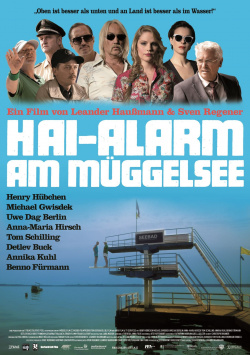 Wat`n dette?, asks the lifeguard (Michael Gwisdek) of Müggelsee, when he suddenly has one hand less one morning while bathing. Everything points to the unbelievable: a shark is making the idyllic lake in the Berlin district of Friedrichshagen unsafe. And this of all times, when the mayor (Henry Hübchen) has just opened the big surf paddling school. There is only one way out: the shark alarm is sounded. But neither city marketing expert Vera Baum (Anna-Maria Hirsch), nor the fish expert (Tom Schilling) from the Humboldt University, nor police officer Müller (Detlev Buck) know exactly how to deal with this unusual situation for Friedrichshagen. Luckily there is Snake Müller (Uwe Dag Berlin), a shark hunter who has just returned to his old home from Hawaii. Will Snake Müller be able to kill the shark? Will the Müggelsee soon become a bathing paradise again and bring new money into the coffers of the rich man from Friedrichshagen (Benno Fürmann)? Or will there be a big catastrophe after all?

All the answers to these and other burning questions are given by Leander Haußmann and Sven Regener in Hai-Alarm am Müggelsee, the first and so far best contribution to the new cinematic genre of the alarm film. It is a completely new art form to which the viewer will first have to get used. Thus, there is a danger that there will be few to whom this auteur film, which Sven Regener has called the ultima ratio of the cinematic revolution, will open up, and that the genius of mixing elements of disaster and action films with the classic bureaucratic drama will not be recognized for many years to come.

On the other hand, of course, the flick can be judged this way: in their first directorial effort together, Haußmann and Regener have staged an unrestrainedly silly fun movie that, with dry wordplay, all sorts of absurdities, and a somewhat trashy production, really only allows for two reactions: either you roll on the floor in tears of laughter, or you leave the cinema annoyed. In between there's nothing really. To find the movie just quite nice and quite amusing is actually impossible. Either he hits the humor center with his very special way, or completely misses.

Who grew up with the comedies of Zucker/Abrahams/Zucker (The Incredible Journey in a Crazy Airplane, The Naked Gun), will feel some influences here, as well as from the films that Helge Schneider has given his fans. And here and there, especially in the dialogues, a little Loriot even flashes up in the best moments. The best thing about this crude mixture is that it's obvious to the actors that they didn't make this film for the money, but simply for the fun of it. This isn't about possible movie awards or highbrow art. No, this film was simply made for the enjoyment of all involved. And that, of course, transfers to the viewer as well. In a jumble of concern dramas and clumsy fecal comedies, it is simply refreshing to be allowed to laugh at such an outright nonsense (in the best sense of the word, of course).

Who likes completely absurd, but mostly wonderfully dry humor, who can have fun with happy trash and doesn't always like perfectly staged glossy products and who wants to know what happens if a shark alarm should really be declared, this first - and hopefully not last - alarm film can be warmly recommended. Absolutely worth seeing

Cinema trailer for the movie "Shark alert at Müggelsee (Deutschland 2012)"
Loading the player ...