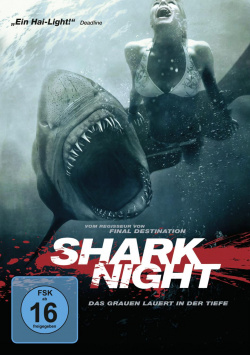 Film: David R. Ellis, director of films such as Snakes on a Plane and Final Destination 4, remains true to the horror genre with his latest work Shark Night. With some gory effects, attractive actors and a touch of self-mockery, Ellis once again aims to provide entertaining entertainment. But since he goes this time a little more restrained to the thing, the result is also only conditionally worth seeing turned out.

Sara (Sara Paxton) and her friends want to spend a wild party weekend at the vacation home of her parents at the Morris salt water lake in Louisiana. The mood is upbeat, with partying, flirting and drinking for all it's worth. But then the unbelievable happens: during a daredevil stunt on a wake board, the athletic Malik (Sinqua Walls) falls into the water. When he resurfaces and drags himself to shore, he's missing an arm. What at first looks like an accident turns out to be a shark attack. And it's not just a hungry shark swimming in the lake. The waters are literally teeming with the bloodthirsty monsters. And while those surrounded seek a way to escape to safety, a much greater danger lurks from an unknown source.

Shark Night is pure trash. Certainly, David R. Ellis doesn't really go out of his way to cover that fact. After all, the resolution alone of how and, more importantly, why the sharks got into the saltwater lake is so absurd it's almost comical again. A few nicely animated shark attacks with lots of movie blood, plus attractive bodies in skimpy bikinis and swim trunks and there you have it, genre fun for fans of entertaining B-movies.

Where the film ultimately fails, however, is in the compromises Ellis has quite obviously made for a lower age rating in the US. Whereas the similarly-named Piranhas 3D was allowed to wallow uninhibitedly in brutality and bare facts, Shark Night has to remain relatively well-behaved. While there are a few well-done effects, the fun factor never reaches the level of absurdity that Piranhas was able to sink its teeth into. Of course, this also makes the weaknesses of the actors and the script more obvious, as the viewer can focus more intently on those aspects of the film. And really, the monster sharks and their victims don't really do well there.

No question, Shark Night has moments that can be described as worth watching and amusing. The good-humored production, which makes no secret of the absurdity of the story, has some entertainment value. However, the staging, which is stripped back for the US PG-13 release, the sometimes arguably clichéd dialogue and flat characters are so dominant, especially in the first 40 minutes, that the bloody shark fun only really gets going in the second half of the film. Therefore: as a pure fun movie quite effective in some moments, but overall Shark Night falls well short of its entertainment potential!

Image + Sound: Although the film is actually designed for a 3D exploitation, visually it works very well in 2D. The image sharpness is at a very good level and in the darker sequences the details come out even better than it has been the case in the cinema with the 3D version. The color balance also provides the right bite and contributes to the overall positive impression of the picture quality. The sound also gets to show off its good surround mix, especially in the second half during the various shark attacks. Good!

Conclusion: Shark Night is nowhere near as entertaining as Piranhas 3D, a certain entertainment factor has the amusingly absurd shark attack but still to offer. Especially the second half of the film pleases with a self-deprecating mixture of horror and trash. The DVD is technically well implemented, the bonus material is clear, but worth seeing throughout. Therefore: no highly intellectual masterpiece, but entertaining entertainment offers the whole thing all the time