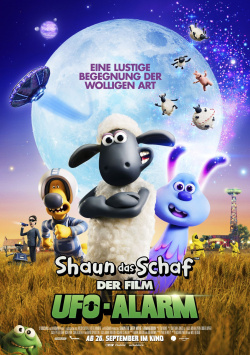 It's so boring! Whenever Shaun the Sheep and his friends at Mossy Bottom Farm find a way to pass the time, farm dog Bitzer immediately puts an end to the fun with new bans. But just as Shaun is about to give up in frustration, an unexpected visitor arrives at the farm: alien girl LU-LA has crashed her spaceship near the farm. With her abilities, she brings with her plenty of new opportunities to play mischief and annoy Bitzer. But the alien girl needs help, too. She's desperate to get back home before the Secret Service can capture her. Of course, Shaun and his friends are happy to lend a hand.

Almost twenty-five years ago, the lovable plasticine sheep Shaun first appeared in the wonderful Wallace & Gromit short film Among Sheep and immediately captured the hearts of viewers. Soon there were Shaun figurines, Shaun backpacks, and numerous other merchandises. The sheep became so popular that the Wallace & Gromit makers made him the hero of his own TV series from 2007. There are now 130 seven-minute episodes each, which are an absolute cult not only among children. After the great success of the first cinema adventure, now comes with Shaun the Sheep - The film: UFO alert the second feature-length film in our cinemas.

The concept still works very well the second time in feature length, even if the whole thing is no longer quite as surprising and charming as the first feature film. But the mix of kid-friendly slapstick and subversive humor, lots of references to cinema and TV classics, and lovable characters makes this plasticine adventure a great treat for young and old alike. The humor is often simple but never really silly, the film has pace without losing its charm in over-the-top action frenzy. And it is a story full of heart and warmth that is never cheesy. And the film manages all this without any dialogues, but only with animal sounds and incomprehensible grumbling of the humans.

Not quite as brilliant as its predecessor, Shaun the Sheep - The Movie: UFO Alert is, on balance, but still more than successful in every respect. If you liked the TV series or even the Wallace & Gromit shorts, you'll love this määäga-good movie too. A timeless fun for all ages and therefore deserved: absolutely worth seeing!

Cinema trailer for the movie "Shaun the Sheep - The Movie: UFO Alert (Großbritannien/Frankreich 2019)"
Loading the player ...