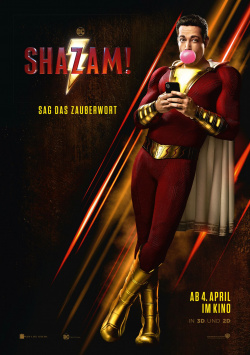 As a child, Dr. Thaddeus Sivana (Mark Strong) had a mysterious encounter with an old magician (Djimon Hounsou) who wanted to transfer all of his power to the boy, but then found that he wasn't worthy of it. Of course, no one wanted to believe him. But for Thaddeus, there was only one goal since that day: to find the mage again and get what was rightfully his: The power of the seven deadly sins. In fact, he succeeds, and the mage now has no time to search any further for a Chosen One. And so he transfers his power to the 14-year-old orphan boy Billy Batson (Asher Angel), who from then on turns into an adult superhero (Zachery Levi) whenever he shouts the word Shazam! Along with his best friend Freddy (Jack Dylan Grazer), Billy tastes the benefits of being a superhero to the fullest until Dr. Thaddeus Sivana tracks him down to rob him of his power. Now the boy must show if he's really ready to be a real hero.

Now another superhero from the DC universe has made it to the big screen in the form of Shazam! However, he comes across as far less dark than his counterparts Batman or Superman most recently. Yes, there's a dark threat and some dark moments here too, but overall Shazam! is something else entirely: thoroughly charming fun. Kids of the 80s will be reminded of Big with Tom Hanks in some scenes. That this is entirely intentional is particularly evident in one scene where director David F. Sandberg pays charming tribute to the cult comedy. But the fantasy adventure scores not only with a certain retro charm, but also with a fair amount of self-mockery regarding the otherwise rather gloomy DC universe, culminating in a truly wonderful final scene before the credits.

The film can very well benefit from the fact that Sandberg has shown a really good hand in choosing the young actors. Newcomer Asher Angel is a real find, and Jack Dylan Grazer, of Es fame, also delivers an absolutely convincing performance that doesn't need to hide behind those of his adult co-stars. The story itself is very simple and conventional in itself. However, the way in which it is told is what makes Shazam! so successful. In terms of tone, the film can most easily be compared to the first Ghostbusters movie: It's a fantasy-comedy, but it has not only laughs, but also some scary moments to offer, and thus never degenerates into a pure slapstick movie.

Neither too colorful, nor too dark, funny, but also exciting and in places surprisingly emotional - this mixture makes Shazam! stand out pleasantly from the crowd of current superhero movies. And the playfulness with which Zachery Levi plays the boy in the body of an adult makes for a relaxed permanent grin during the magic shower. It's nice to see that there are always filmmakers who manage to enrich a genre as rigid as comic book adaptations in a surprising and charming way. So slowly we can look forward not only to new MARVEL movies, but also to fresh DC fodder. A great time to be a fan of this genre!!! Absolutely worth seeing!