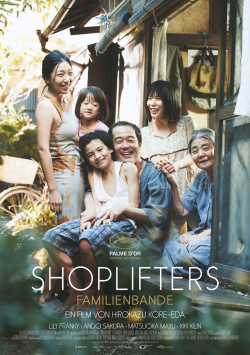 Osamu Shibata (Lily Franky) was once again successfully on a supermarket thieving spree with his son Shota (Kairi Jyo) when they find little girl Yuri (Miyu Sasaki) on their way home. The little girl was simply locked out in the freezing cold by her parents, for whom she is just an unwanted burden. Without further ado, Osamu decides to take the girl with him. Despite initial doubts, his wife Nobuyo (Sakura And&ograve;) also takes in the new family member, even though the small home is more than overcrowded with grandmother Hatuse (Kilin Kiki) and Shota's half-sister Aki (Mayu Matsuoka). From then on, the girl leads a very simple life, but in the process experiences something that has been denied to her until now: love and attention. And so everything in this patchwork family seems to be heading for a happy ending, until an unforeseen incident reveals Osamu and Nobuyo's secrets - threatening to destroy Yuri's newfound family happiness for good.

Shoplifters - Family Ties, the winner of the Palme d'Or at the Cannes Film Festival, asks an interesting question: what makes a family? Blood ties? Wealth? Can you choose your family and can there be such a thing as true happiness even in a family-like construct that makes a living through theft and other racketeering? In the process, the viewer is thrown into a moral dilemma: we see how Yuri is treated by her biological parents. What Osamu and Nobuyo do may be legal at the beginning, but then it clearly becomes child abduction in legal terms. One is happy for the girl when her eyes sparkle with joy that she isn't constantly scolded here, but also taken in her arms once in a while. But this legitimizes the crime.

You're quickly inclined to answer that with a resounding yes, because the girl is clearly better off away from her parents. But of course it's not that simple - nor should it be. Hirokazu Kore-Eda makes this impressively clear in his very quiet drama. The narrative tempo tends to zero at times, which is why the film, despite its really interesting and also moving story, is a bit exhausting in some moments - at least for viewers who are not used to such a pace. But it's really worth it to get involved with the sometimes unwieldy production. Because the story still takes twists and turns that make the action not only involving in a very subtle way, but also very moving.

Shoplifters - Family Ties is a film that makes you think, that touches and - at least friends of quiet arthouse cinema - also entertains well. Finally, another festival darling that not only excites the feuilleton, but could also appeal to a (slightly) broader audience. Worth seeing