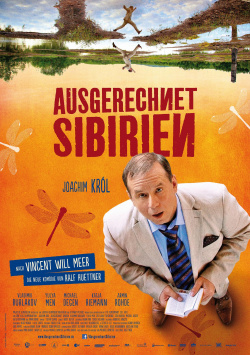 Siberia of all places

Matthias Bleuel (Joachim Król) leads an orderly but rather grey life. Since divorcing his wife (Katja Riemann), the logistician of a fashion mail order company can only escape his stuffy row house existence with the help of audio books about shamans and mystical worlds. Nevertheless, Matthias simply cannot imagine another life. And so he is not very pleased when his boss (Michael Degen) sends him to a tiny branch office of the company in southern Siberia, of all places. There the pedant, striving for constant correctness, encounters a mentality that is completely alien to him. Despite the constant efforts of his interpreter Artjom (Vladimir Burlakov) to make it clear to Matthias that the clocks simply tick differently here than in Germany, the logistician simply cannot make friends with the Russian attitude to life and work. This changes abruptly when he meets Sajana (Yulya Men), who with her throat singing takes him straight into the dream world he has always escaped to with the help of his audio books. Matthias is sure that this encounter could not have been a coincidence and so he decides to follow Sajana to her small home village. Together with Artjom, he embarks on a journey that will turn his entire life upside down...

Siberia of all places is the long-awaited sequel to Ralf Huettner's surprise success Vincent will meer. This had with a skillful mix of comedy and drama, sympathetic characters and a beautiful story over a million visitors in the cinemas. It is doubtful that Huettner will be able to do the same with his new film. Because all the successful aspects of Vincent will meer simply do not want to work here. On the one hand, the viewer expects a comedy, but the whole thing is only really funny in a few moments. But even as a drama of self-discovery the whole thing only works to a certain extent, especially at the beginning too many stale clichés are used. Even if Joachim Król delivers a really good performance, his character is neither particularly original nor really likeable. And the various culture-crash moments between the stuffy German and the hearty Russians are also tediously unimaginative.

When Matthias and Artjom embark on their journey to Sajana, the story finally finds its own way. This is where there are some very nice and amusing moments. And especially viewers who are interested in the world of shamans will surely get their money's worth. Still, despite some very nice pictures the movie never really wants to ignite. The production wavers too indecisively between conditionally funny comedy and almost esoteric drama, the story seems too trivial to really appeal to a broader audience. You can tell that the film was made with a lot of passion and enthusiasm. And maybe the expectations after Vincent wants more were just too high. But the bottom line is that Siberia of all places is not much more than a quite likeable, but unsurprising film on a decent TV level. Good actors and a nice idea are only enough to certify the film as only partly worth seeing

Cinema trailer for the movie "Siberia of all places (Deutschland 2012)"
Loading the player ...