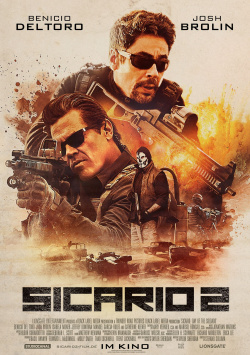 After a devastating attack, apparently perpetrated by terrorists smuggled across the Mexican border, US agent Matt Graver (Josh Brolin) is given a particularly explosive assignment: as a retaliatory measure, a war is to be instigated in Mexico between the hostile drug cartels. With the help of the Colombian mercenary Alejandro (Benicio Del Toro) Graver is supposed to kidnap the daughter of the powerful cartel boss Carlos Reyes. But Alejandro has something else in mind, after all, with Reyes he has an old score to settle…

With "Sicario", Franco-Canadian Denis Villeneuve ("Prisoners") delivered no less than one of the best films of 2015.  The thriller was simply perfect tension cinema in every respect. The story was closed in itself, so that a continuation would not have been necessary. At the box office the thriller was a respectable success, but also far from being a real blockbuster. And yet Part 2 is now coming to the cinemas - without director Villeneuve and without leading actress Emily Blunt.

"Sicario 2" is a good sequel. At times even a very good one, which can compete atmospherically with its grandiose predecessor. Director Stefano Sollima ("Suburra", "Gomorrah - the series") and screenwriter Taylor Sheridan have staged an exciting story that works independently, but at the same time consistently expands the story of the first film. However, there are two problems: On the one hand, there is the absence of Emily Blunt's character Kate Marcer, who was of immense importance as a moral counterweight to Graver and Alejandro. This counterweight is omitted here and is shifted to Alejandro of all people. And that brings us to the second problem: Those who can remember the fierce final of part 1 will be very surprised at certain decisions made by the mercenary here.

Such criticisms prevent the sequel from playing in the same league as the first album. The story is exciting, the music by Hildur Guðnadóttir, who not only continues the ingenious work of his colleague Jóhann Jóhannsson, who died far too early, but also quotes it again and again, is subtly captivating and the visual language extremely atmospheric. The actors also act on a very high level, which can compensate for the weaknesses on the one hand, but on the other hand also makes them more annoying. Because in itself there are all prerequisites for a great sequel, which are blocked by some unfortunate screenplay decisions, especially towards the end.

However, it must be quite honest here: That's high-level whining. Because "Sicario 2" in itself is a first-class staged, excitingly written and well played thriller, which offers really high-quality entertainment. Absolutely worth seeing]