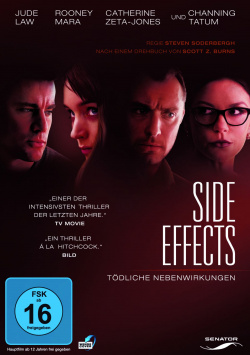 Film: It was a message that might have shocked many movie lovers: Director Steven Soderbergh had announced his intention to retire from the cinema business. At least in the near future Soderbergh will not have any new movies anymore, because he simply doesn't want to accept the restriction of creative freedom by producers and studio bosses anymore. His probably last film, a biography about Liberace with Michael Douglas and Matt Damon, he produced only for an American cable station HBO. Even though this film was nevertheless released in other countries - as in Germany - the thriller "Side Effects" is considered Soderbergh's official farewell to the cinema business. And it shows once again why Soderbergh, despite some creative flops, is one of the best and most versatile filmmakers of his generation.

At the center of the story is the young Emily (Rooney Mara), whose well-off life has completely collapsed when her husband Martin (Channing Tatum) goes to jail for insider trading for several years. From then on, Emily's everyday life is dominated by depression, which she wants to hide from Martin when he is finally released from prison. But the pressure becomes too great and Emily's desperation ends in an attempted suicide. Only the promise to visit him several times a week in his practice persuades the ambitious psychiatrist Dr. Jonathan Banks (Jude Law) not to admit Emily to his closed practice. After talking to Emily's former therapist (Catherine Zeta-Jones), Dr. Banks wants to get the young woman's anxiety disorders under control with the help of lengthy conversations and a new psychotropic drug, thus enabling her to lead a completely normal life. But the new drug has enormous side effects, which have fatal consequences for the marriage of Emily and Martin and for the career of Dr. Banks...

"Side Effects" at the beginning reminds us of another film by Steven Soderbergh. After Emily's collapse and the appearance of Dr. Banks, the whole thing looks almost like a more dramatic version of "Erin Brokovich" aimed at the pharmaceutical industry. With very clever dialogue scenes between Banks, his colleagues and representatives of the pharmaceutical industry, some of which are extremely comical in their real absurdity, Soderbergh cleverly stirs up expectations, which he counteracts with a surprising twist. Questions about medical ethics, the often careless handling of psychotropic drugs, especially in the USA, and the influence of the pharmaceutical industry on the work of doctors and psychologists continue to play a central role. Nevertheless, in the second half the film turns into a cleverly constructed thriller, which despite its not unexpected resolution can pack to the end.

Although Jude Law delivers a very convincing performance as a desperate doctor fighting for his reputation, his career and his marriage, in the end it is Rooney Mara who can leave a particularly lasting impression. Mara, who won an Oscar nomination for her portrayal of Lisbeth Salander in David Fincher's US remake of "Verblendung", delivers a performance that actually only gains enormous persuasiveness through the twist in the last minutes of the film. Her performance has been very good so far, but only the revelation of another side of this character gives the whole a very special and lasting note.

"Side Effects" is an intelligent, clever and extremely entertaining thriller, which can convince dramaturgically, acting and visually all along the line. It may not be Steven Soderbergh's best film. But should it really be his last cinema production next to "Liberace", then the filmmaker has said goodbye to his viewers at least on a very high creative level - whereby a possible return in a few years would be received all the more favourably. But no matter whether Soderbergh retires from the cinema or just takes a break, the quality of "Side Effects" is of course not affected. If you like thrillers of the more demanding kind, this movie is warmly recommended to you. Absolutely worth seeing!

image + sound: The image is immersed in very warm colors. Here and there the optics appears a little soft drawn, which is however a consciously used stylistic device. Despite some weaknesses in the sharpness of detail that go hand in hand with this, the rating should therefore not be negative. The Dolby Digital 5.1 Mix is pleasantly powerful, with music and dialogue setting the tone. There are no large sound effects, but atmospherically converted ambient noises provide here and there for pleasant movement in the surround range. Good!

Extras: Really comprising the bonus material has not failed. In addition to two fictional commercials for "Ablixa" (approx. 0:52 min.) and "Intenin" (approx. 0:46 min.), there is also a look behind the scenes shot on Super 8 (approx. 2:46 min.), which humorously deals with the work of "Oscar loser Rooney Mara". In addition there is the obligatory trailer. Quite entertaining, but unfortunately far too little.

Fazit: "Side Effects - Tödliche Nebenwirkungen" is a stirring mixture of thriller and drama, which can convince with some biting satirical moments and surprising twists. Told captivatingly, immersed in an atmospheric visual language and very well played, Steven Soderbergh's (pre-)last movie proves to be a delight for all lovers of thriller dramas of the more demanding kind. The DVD presents the work in adequate picture and sound quality, only the bonus material weakens the disc a little. Yet in the end, it's clearly enough for one: absolutely recommended!