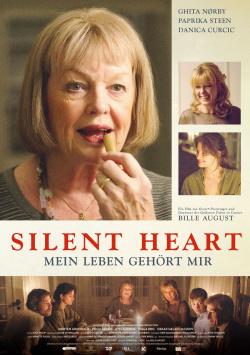 Silent Heart - My Life Belongs to Me

Esther (Ghita N&oslash;rby) and her husband Poul (Morten Grundwald) have invited their family to spend a weekend together. But eldest daughter Heidi (Paprika Stehen), her husband Michael (Jens Albinus), her sister Sanne (Danica Curic) and her sister's boyfriend Dennis (Pilou Asb&aelig;k) are no more than Esther's best friend Lisbeth (Vigga Bro) come to the picturesque lakeside house for a fun-filled family gathering. They have all come to say goodbye to Esther. For she has been suffering from ALS for some time and has decided to end her life before she fully loses control of her body and miserably dies. On the surface it seems that the daughters have accepted their mother's decision, but over the course of the weekend it is revealed more and more clearly how badly they can in reality deal with Esther's wish to die in a self-determined way. Sanne even plans to prevent her mother's death at the last moment after all.

With Silent Heart - My Life Belongs to Me, Danish director Bille August (Night Train to Lisbon, The Haunted House) has staged a quiet, sensitive drama about dying, about self-determination but also about family relationships. It is a very beautiful, but also extremely difficult and sad film, which leaves its viewers very depressed. In this respect, it is very difficult to give it a clear recommendation. Because even if the movie is crafted beyond any doubt, the actors are all great because they act very true to life and the story has an enormous emotional power, it's not a real pleasure to watch this drama. So if you want to experience an entertaining evening at the cinema, you are definitely in the wrong film here.

But if you are not afraid of heavy fare, you will be offered a film that is extremely intense in its silence. Long takes, beautiful images suffused with a depressing dreariness, extended conversations and small moments of redeeming lightness define the proceedings. With enormous restraint, August creates the picture of a family that threatens to drift further apart than before due to the mother's decision to die with dignity, before it is then able to grow closer together over the course of the weekend. The award-winning director skilfully avoids overly striking emotions and dripping clichés, preferring instead to rely on a very true-to-life tone that hits the viewer even more intensely.

So it's hard not to be overcome by an enormous sadness at the end. Leaving the cinema with dry eyes and quickly shaking off the heaviness that the film leaves behind despite its beauty is almost impossible. You should be aware of that beforehand. But if you are up for it and want to experience extremely touching, stirring and beautiful drama cinema of the quiet kind, you should not miss this work. Worth seeing

Cinema trailer for the movie "Silent Heart - My Life Belongs to Me (Dänemark 2014)"
Loading the player ...