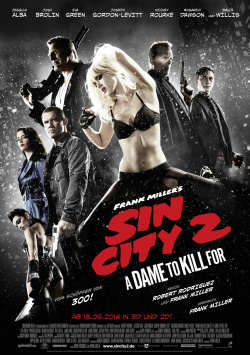 Sin City 2: A Dame To Kill For

The streets of Sin City turn blood red again as Robert Rodriguez sends his all-star ensemble through three dark tales penned by Frank Miller. There's young gambler Johnny (Joseph Gordon-Levitt), who stretches his luck a bit when he rips off ruthless Senator Roark (Powers Boothe), of all people. Johnny quickly and painfully realizes that Roark is not a good loser. But he still has an ace up his sleeve. Dwight (Josh Brolin), on the other hand, wants to stay out of trouble. But when his ex-girlfriend, the seductive Ava (Eva Green), asks him for help because she is allegedly being brutalized by her husband Damien (Marton Csokas), Dwight, against all better judgment, can't resist her powers of seduction. He decides to help her. But her brutal bodyguard Manute (Dennis Haysbert) wants to prevent that at all costs. At the same time, Marv (Mickey Rourke) wants to find out what it is about the dead teenagers he woke up next to. The last thing he remembers is watching stripper Nancy (Jessica Alba) dance. What happened after that? And what is Nancy, who couldn't handle Hartigan's (Bruce Willis) death, up to?

Nine years it has taken Robert Rodriguez to bring the fan-anticipated sequel to Sin City to theaters. Nine years in which the cinematic landscape has also changed a bit. What made the film adaptation of Frank Miller's graphic novel so special at the time just isn't particularly revolutionary nearly a decade later. Characters like Marv, who would have had the makings of cult characters, are now only known to diehard fans after all this time. And some of the actors of the first part had to be replaced, because they either died (Michael Clarke Duncan) or were no longer available for other reasons (Devon Aoki, Clive Owen). Actually, all of these are not reasons why Sin City: A Dame To Kill For would still be worth seeing.

However, even though the film comes quite a few years too late, when viewed detachedly, it is absolutely successful as a sequel. It remains consistently true to the concept of the first film, both stylistically and dramaturgically. As with the first film, the first-class cast was filmed almost exclusively in front of a green screen. There were hardly any sets or props, almost everything that can be seen in the film was added later with the help of CGI. The result is a look that is less subject to the laws of a motion picture and more to those of a graphic novel. This still takes a bit of getting used to at times, but once you've gotten into it as a viewer, you're immediately drawn back into the dark world of Sin City. The grandiose play with light and shadow, the targeted use of very few colors and a visuals that overall can only be described as fascinating, just works really well in the second attempt - even if the wow effect of the first part is missing.

Also, the episodic structure of the film strongly resembles that of a comic book, with the three individual stories only loosely connected. The whole thing is gritty, brutal, sexy and politically incorrect in every way. One can clearly feel the influence that the crime stories of Raymond Chandler and his ilk and the genre of film noir had on Frank Miller, who grew up in rural Vermont. Especially the character of Ava, played by Eva Green, is a perfect example of the classic femme fatale, and Green turns out to be a perfect casting. This isn't (just) because she isn't afraid to walk through the picture textile-free at almost every opportunity that presents itself. Rather, it's the mix of lascivious seductiveness and bitterly vicious coldness that Green is able to exude through only slight changes in her facial expressions.

Anyway, the plotline involving Dwight, who desperately tries not to be drawn into Ava's web of seduction and manipulation, is among the film's strongest moments. But the strand around the young gambler Johnny is also really good, which is not necessarily due to the story, but mostly to the strong actors. Joseph Gordon-Levitt is already very good, but Powers Boothe is just killer as the ruthless senator. Boothe has such tremendous charisma that after watching this film, you rightfully wonder why you don't see the actor in great films much more often.

The story about Nancy finally wanting revenge for Hartigan's death, while pretty to look at, is clearly the weakest compared to the other two episodes. Overall though, there really isn't much negative to say about Sin City: A Dame To Kill For. Alright, the style isn't new anymore, it's been too long since the first part and there are definitely a few small lengths. But the bottom line is that the film offers perfect noir entertainment: bloody, dirty, sexy and cool. And for that you get a seductive look from Eva Green and a clear: Worth seeing!