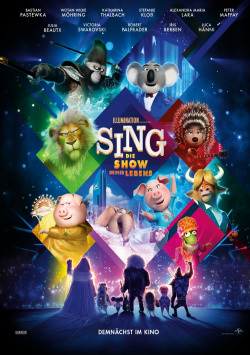 It may be sung again, what the stuff holds. The animal troupe around koala Buster Moon (voiced by Bastian Pastewka) is back and celebrates respectable, but not really stunning success with their small-town production. But Buster Moon has a dream: he wants to conquer the big city with a huge, extravagant stage show. But the audition with music mogul Jimmy Crystal seems to fail miserably, until Pig Gunter promises the nasty wolf a real sensation: in their show, rock legend Clay Calloway (Peter Maffay), who completely retired years ago, would make his big comeback. Now the ensemble around pig mother Rosita, rocker porcupine Ash, elephant Meena, gorilla Johnny and pig Gunter must not only prepare for a show that has not even been conceived yet. Buster Moon also has to find the old lion and persuade him to make a comeback - if that ever works out....

"Sing - The Show of Your Life" is the sequel to the animated hit "Sing", which was able to bring in over 600 million dollars worldwide in 2016. So of course a second part with the singing and dancing critters was quickly a done deal. Personally, I wasn't a particularly big fan of the first part, since it primarily only made an effort of a gimmick that could be observed at the end of countless animated films in recent years: funny characters - preferably animals - perform cover versions of well-known hits and dance to them. What was surprising and funny in the first "Sherk" movie is now just unimaginative and lame (even if it may still work, especially for the younger target audience). I really don't need that for a whole movie.

I was all the more surprised by how well I liked the sequel. I do not consider part 2 a masterpiece either, but definitely an entertaining animation fun that has much more charm and wit than its predecessor. The way the big show is put on by the group around Koala Buster Moon or the detailed urban jungle are a lot of fun. There are some small lengths with almost two hours running time, but overall the pace is also better than in the first film.

The song selection is again very good, although there are again almost exclusively cover versions to hear. For the end credits, however, U2 actually recorded a new song, with singer Bono also providing voiceover in the original. He speaks the lion Clay Calloway, who is spoken by Peter Maffay in German. The German dubbing can't quite match the original, especially in terms of star power, but is really successful overall. Especially Bastian Pastewka, who took over the role of Buster Moon from Daniel Hartwich, does his thing really well and gives the figure a very unique character.

"Sing - Die Show Deines Lebens" is not a masterpiece, but entertaining family entertainment with some nice gags, high show values and a great soundtrack. And for it there is then under the bottom line also a more than deserved: Worth seeing!