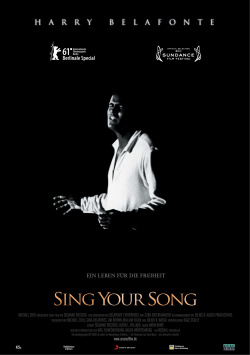 That Harry Belafonte is a great musician is probably known to most people. 100 million sold sound carriers speak a clear language. His calypso hit Banana Boat Song is a timeless classic that has survived all musical fashions. Belafonte has also proven his qualities as an actor in over 40 films. His value as an artist is therefore an undisputed fact. What few people know, however, is that Harry Belafonte was also extremely politically engaged throughout his life and still is today.

The documentary Sing your Song impressively traces the life of the artist and man Harry Belafonte. Through many interviews and archival footage, it becomes clear just how much he faced racist hostility, even when he was already being enthusiastically celebrated on stages. But this did not make him small, it made him stand up more for the rights of black people in the USA and later also against apartheid in South Africa. He fought alongside Martin Luther King and Nelson Mandela, using his popularity to draw attention to grievances, but never putting his person first. As a result, his political activism was hardly noticed by the public, but his commitment to justice was no less effective.

So the documentary is no self-congratulation, no thickly applied paean to an artist guided by an inflated ego. Rather, it is a compelling portrait of an interesting and admirable human being on the one hand, and an engaging contemporary document of American history from the 1950s to the 1970s on the other. Whether you like Harry Belafonte's music or not, by the end of this film, once you realize how committed the man is to justice around the world to this day, you'll simply feel inspired and impressed. A great documentary that can be warmly recommended not only to music lovers!